The Family Man Season 2: Chellam Sir is the New 'Google' for Fans of Manoj Bajpayee's Web Series; Check Out Funny Memes and Jokes!

Netizens are going bonkers over Uday Mahesh's character Chellam sir from The Family Man Season 2. They have compared him to Google. Check out some funny memes here. 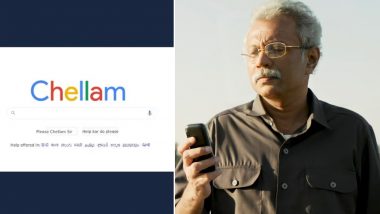 Manoj Bajpayee and Samantha Akkineni's act in The Family Man Season 2 is been loved by audiences and critics alike. The web series is directed by Raj & DK and was one of the most anticipated releases of this year. However, apart from the leads, there is this character named Chellam sir (Uday Mahesh) who is creating a lot of positive noise on the internet. His screen time in the series is of approximately 15 minutes, yet he has left an impression. He plays the role of a retired member of NIA –National Investigation Agency, who helps Manoj's character in the series. The Family Man Season 2 Ending Explained: How Manoj Bajpayee, Samantha Akkineni’s Series Introduces Srikanth’s Next Mission for Season 3! (LatestLY Exclusive).

Well, apart from Chellam sir's acting prowess, netizens are impressed how this human is a super-spy who conveniently has knowledge of everything and appears anywhere. Twitterverse has gone crazy over this character and has compared him with Google. Not just this, they also want to see him in The Family Man Season 3. Here, check out funny reactions to Chellam sir below. The Family Man Season 2 Review: Manoj Bajpayee and Samantha Akkineni’s Series Feels a Major Disappointment in Its Second Outing (LatestLY Exclusive).

Whatever the problem is, chellam has the solution for it - pic.twitter.com/1KhPUI3Z29

A man who knows everything-

This is insane, seems like Chellam sir is the most interesting takeaway from The Family Man Season 2. Apart from TFM2, Uday Mahesh has also starred in Madras Cafe and Serious Men. In case, you have not yet watched The Family Man 2, it's streaming on Amazon Prime Video. Stay tuned!

(The above story first appeared on LatestLY on Jun 08, 2021 03:39 PM IST. For more news and updates on politics, world, sports, entertainment and lifestyle, log on to our website latestly.com).