The Family Man Season 2: Was Manoj Bajpayee’s Track With His Controlling Boss Inspired by Disney’s The Incredibles? (LatesLY Exclusive)

Plus there is also a Leonardo DiCaprio and Matthew McConaughey connection too! The Family Man Season 2 stars Manoj Bajpayee, Priyamani, Samantha Akkineni, Sharib Hashmi, Sharad Kelkar among others, and is created by Raj & DK. 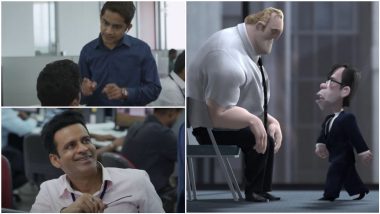 The Family Man Season 2: Was Manoj Bajpayee’s Track With His Boss Inspired by The Incredibles? (Photo Credit: Twitter)

The Family Man Season 2 has been a hot topic on social media, ever since the series dropped its new season last week on Amazon Prime Video. Most of the netizens are in awe of the performances, the direction and the characters in the series. On Twitter and Facebook, we have been seeing fans dissecting scenes, characters and the dialogues and giving their own interpretations. The series stars Manoj Bajpayee, Priyamani, Samantha Akkineni, Sharib Hashmi, Sharad Kelkar among others, and is created by Raj & DK. The Family Man Season 2: Chellam Sir is the New 'Google' for Fans of Manoj Bajpayee's Web Series; Check Out Funny Memes and Jokes!

One of the most loved subplots in The Family Man season 2 is a hilarious track involving Srikant Tiwari (Manoj Bajpayee) and his overbearing new boss, played by Kaustubh Kumar. (Minor SPOILERS ahead) After a disillusioned Srikant leaves his TASC job to work more on his personal life, he joins an IT company where he gets a boss from hell. His 20-something boss Tanmay wants him to not be the 'minimum guy', and like Srikanth, even we are clueless as to what that means.

His boss keeps hovering on his head, ticks him off for coming 'late' (though Srikant was well-within the company's checkin time), frowns when he attends personal calls or has personal visitors, or scold him when he doesn't attend a colleague's birthday cake-cutting timeout. The Family Man Season 2: From Manoj Bajpayee’s Srikanth to Samantha Akkineni’s Raji, Explaining the Final Fates of All the Major Characters.

So when Srikant decides to join TASC back, he doesn't go without slapping his former boss in the meeting room and totally intimidating him. So if his boss was a bully, then Srikant also turned out to be a bigger bully before leaving.

While the track left people in splits, we won't blame you for having a sense of dejavu. For we saw a similar scene in a very popular Disney animated Hollywood movie, some 17 years back!

Only in the case of Brad Bird's 2004 film The Incredibles - popular among Indian fans because Shah Rukh Khan and his son Aryan lent their voices for the Hindi dubbed version - has its male protagonist, Mr Incredible, as a retired superhero and not a super-spy! Incredibles 2 Movie Review: More Than Elastigirl or Mr Incredible, It Is Little Jack-Jack Who Makes This Animated Film Entertaining.

But most of the other beats are similar to Mr Incredible, sulking that he is not a superhero anymore and stuck at a desk job, silently bears the jabs of his obnoxious boss. Till one day, his frustration of not helping a mugging victim (because his boss doesn't allow him to leave in the middle of a dressing down) gets out of his control and his boss comes at the receiving end of his powerful fist!

Interestingly Tanmay's chest-thumping scene, that you can see in the video below...

... also seems to be inspired by this scene featuring Leonardo DiCaprio and Matthew McConaughey from Martin Scorsese's The Wolf of Wall Street.

So what do you think? Do you feel that the makers of The Family Man were inspired by this scene from The Incredibles? Share your thoughts in the comments section below.

(The above story first appeared on LatestLY on Jun 09, 2021 03:53 PM IST. For more news and updates on politics, world, sports, entertainment and lifestyle, log on to our website latestly.com).