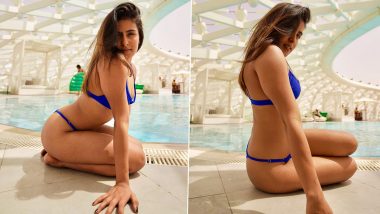 Kannada actress Samyukta Hegde's bikini poses at Dubai have gone viral on social media. Traditional Kannada audiences who are not exposed to such a glamorous presentation have gone crazy about her clicks. "Not sure if I was beating the heat or raising temperature!" Urfi Javed Finds Competition in Julia Fox! Kanye West Ex Goes Grocery Shopping in Bikini, Denim Jacket and Matching Boots, Pics Go Viral.

Samyukta captioned her hot photograph. Samyukta made her debut with super hit 'Kirik Party' movie opposite Rakshit Shetty. She had won Filmfare Award for Best Supporting Actress in Kannada for the movie. She had made her debut in Tamil language with 'Comali' along with Jayaram Ravi and Kajal Agarwal. Sunny Leone Birthday Special: 8 Hot Bikini Pictures of Bollywood’s Bombshell That Are Gorgeous!

Samyukta Hegde Is a Hottie in This Bikini Pic

(The above story first appeared on LatestLY on May 18, 2022 06:55 PM IST. For more news and updates on politics, world, sports, entertainment and lifestyle, log on to our website latestly.com).