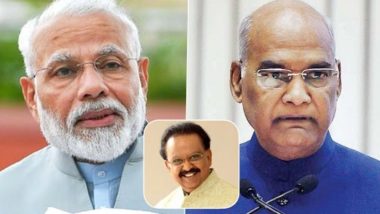 Mumbai, September 25: Legendary singer SP Balasubramanyam died at the age of 74 years due to coronavirus today. He passed away at 1:04 pm, in Chennai today. The veteran singer had tested positive for COVID-19 and had been admitted to the hospital on August 5. From PM Narendra Modi, President Kovind, Rahul Gandhi and other political leaders have expressed condolences to his family, friends and admirers.

While his health started to improve in the last few weeks, the hospital authorities issued an official statement that his health deteriorated in the last 24 hours, calling it "extremely critical." RIP SP Balasubrahmanyam: Fans Mourn the Loss Of Legendary Indian Singer, Say His Iconic Voice Will Be Cherished Forever.

In the passing of music legend SP Balasubrahmanyam Indian music has lost one of its most melodious voices. Called ‘Paadum Nila' or ‘Singing Moon’ by his countless fans, he was honoured with Padma Bhushan and many National Awards. Condolences to his family, friends and admirers.

With the unfortunate demise of Shri SP Balasubrahmanyam, our cultural world is a lot poorer. A household name across India, his melodious voice and music enthralled audiences for decades. In this hour of grief, my thoughts are with his family and admirers. Om Shanti.

My heartfelt condolences to the bereaved family and friends of Mr S. P. Balasubrahmanyam. His songs touched millions of hearts in many languages. His voice will live on.#RIPSPB

SP Balasubrahmanyam lent his voice for several songs of Salman Khan and other major actors. He will always be remembered for his iconic songs such as "Maine Pyaar Kiya" title song, A R Rahman's famous composition "Roja" and several others.

(The above story first appeared on LatestLY on Sep 25, 2020 03:31 PM IST. For more news and updates on politics, world, sports, entertainment and lifestyle, log on to our website latestly.com).