Sufiyum Sujatayum, starring Jayasurya and Aditi Rao Hydari in the lead, is the upcoming Malayalam film that is all set to be released on Amazon Prime Video. This is the first movie in Mollywood to get a direct web release. 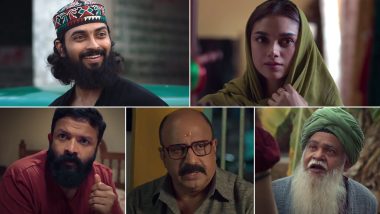 Sufiyum Sujatayum is the upcoming Malayalam film that is all set to be released on Amazon Prime Video. This is the first movie in Mollywood to get a direct web release. Ahead of the grand premiere, the makers have released the trailer of Sufiyum Sujatayum, starring Jayasurya and Aditi Rao in the lead. Ever since the film’s title and poster was released, movie buffs were eagerly waiting to know more details of the film. And with the trailer being dropped online, one will get the hint that Sufiyum Sujatayum is not just a musical love story, but a classic tale of inter-faith lovers. Jayasurya – Aditi Rao Hydari’s Sufiyum Sujatayum to Premiere on Amazon Prime Video on July 3.

This is the second Malayalam project for lead actress Aditi Rao Hydari. She had earlier featured in the film Prajapathi, released in 2006, in which she starred alongside Mammootty. In Sufiyum Sujatayum, Aditi plays the character of mute girl named Sujata. She is an angelic beauty who falls in love with a Sufi priest, played by Dev Mohan. The trailer gives a glimpse of these inter-faith lovers, and it’s pure and magical. But Sujata’s family had some other plans for her. They get her married to a man named Rajeev, played by Jayasurya. Rajeev and Sujata get married to each other, but the former realises that his wife cannot forget her past and isn’t happy in this marriage. Sufiyum Sujatayum to Release on Amazon Prime Video, Kerala Film Exhibitors Federation Threatens to Ban All Movies of Jayasurya and Vijay Babu?

Watch The Trailer Of Sufiyum Sujatayum Below:

The music of Sufiyum Sujatayum composed by M Jayachandran is indeed a beautiful one. From the background scores to the songs, it is just perfect for this musical love tale. Produced by Vijay Babu under Friday Film House banner, Sufiyum Sujatayum is all set to be premiered on Amazon Prime Video on July 3!

(The above story first appeared on LatestLY on Jun 24, 2020 01:34 PM IST. For more news and updates on politics, world, sports, entertainment and lifestyle, log on to our website latestly.com).