Earlier today it was confirmed that five south movies will be released on the streaming platform Amazon Prime Video and Jayasurya starrer Sufiyum Sujatayum was one among them. 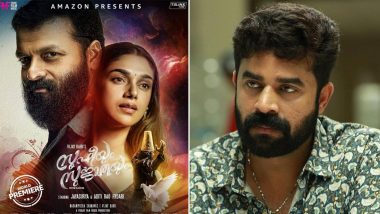 Earlier today it was confirmed that five south movies will be released on the streaming platform, Amazon Prime Video. The five films that would skip theatrical release and get a direct web release are Ponmagal Vandhal (Tamil), Penguin (Telugu), Law (Kannada), French Biryani (Kannada) and Sufiyum Sujatayum (Malayalam). This decision by the makers came up due to the ongoing global crisis, as there is no clarity when the lockdown will be lifted and when the cinema halls will be reopened. However, this has irked the film exhibitors down south. From Jyotika’s Ponmagal Vandhal to Jayasurya’s Sufiyum Sujathayum, Here Are the 5 South Movies Confirmed to Premiere on Amazon Prime Video.

After Vijay Babu (actor, producer and co-founder of Friday Film House) announced that Sufiyum Sujatayum would be releasing directly on Amazon Prime Video, making it the first Malayalam film to get a direct web release, it irked Kerala Film Exhibitors Federation. Industry expert Sreedhar Pillai shared a tweet that read, “The Kerala Film Chamber has asked an explanation from producer #VijayBabu.”On the other hand, the Twitter handle named Forum Keralam tweeted saying that the Kerala Film Exhibitors Federation has decided to ban all films of Jayasurya and Vijay Babu in the future. Neither Jayasurya nor Vijay Babu has responded to this yet. Ponmagal Vandhal to Release Directly on Amazon Prime Video; Theatre Owners in Tamil Nadu Upset with the Decision.

This is pathbreaking in a way for #MalayalamCinema as #SufiyumSujathayum with bankable stars @Actor_Jayasurya & @aditiraohydari is to premiere shortly on #OTT @PrimeVideoIN, bypassing theatrical release.

The Kerala Film Chamber has asked an explanation from producer #VijayBabu. pic.twitter.com/gt85tjVZV8

About Sufiyum Sujatayum releasing on the OTT platform, M Renjith, President of the Kerala Film Producers’ Association told The Hindu that they did not receive any details from producer Vijay Babu regarding the film’s direct web release. He was quoted as saying, “With no clarity yet on when theatres would reopen after the COVID-19 crisis, we plan to have a joint meeting of all trade bodies in Malayalam film industry soon to discuss the roadmap ahead.” MC Bobby, General Secretary of Film Exhibitors United Organisation of Kerala told the leading daily that they would not be cooperating with Vijay Babu henceforth following his decision on skipping the theatrical release of Sufiyum Sujatayum.

(The above story first appeared on LatestLY on May 15, 2020 03:47 PM IST. For more news and updates on politics, world, sports, entertainment and lifestyle, log on to our website latestly.com).