Thalapathy 65, starring Vijay in the lead, will be produced under the banner of Sun Pictures. It is another major project in which the audience will get to watch action-packed drama. 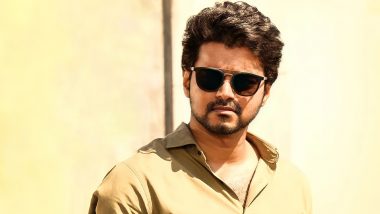 Thalapathy Vijay is currently enjoying the success of his last film Master that has shattered records at the box office. Its theatrical release had to be delayed by a year as the cinema halls across the country and in many other regions of the world had to be shut down from March 2020 in the wake of coronavirus outbreak. It was after eight-long months that the theatres in the country started to re-open and that too it has to adhere to coronavirus safety protocols. Now fans are eagerly waiting for an update on Vijay’s upcoming film with director Nelson Dilipkumar that has been tentatively titled as Thalapathy 65. Thalapathy 65: Shooting Of Vijay’s Film With Nelson Dilipkumar To Commence From April 2021?

Thalapathy 65 will be produced under the banner of Sun Pictures. It is another major project in which the audience will get to watch action-packed drama. As fans were waiting to hear an update on this ambitious project, here are the three latest updates on the film. It has been confirmed that Manoj Paramahamsa, who has worked with Vijay in Nanban that released in 2012, has been roped as the cinematographer for Thalapathy 65. Manoj has also shared a post on the same on Twitter. Thalapathy 65: Nawazuddin Siddiqui Approached To Play the Antagonist in Vijay’s Next Actioner – Reports.

Manoj Paramahamsa Onboard For Thalapathy 65

Excited to start yet another journey with this wonderful human being loved by the entrie state and very soon by the entire nation !.... looking forward to work from where we left #nanban kindleing the memory lane #thlapathy65 going to be an pan india affair ! Get ready folks ... pic.twitter.com/QLoDNPovio

Another major update is that the popular duo, Anbariv, action choreographers and stunt coordinators, will be choreographing power-packed stunts for Thalapathy 65. Anbumani and Arivumani or Anbu and Arivu as they are known, they have choreographed action sequences for films such as Kabali, Singam 3, KGF: Chapter 1, Kaithi, among others.

The National Award-winning stunt choreographer duo #Anbariv Masters (Anbu & Arivu) will be teaming up with #ThalapathyVijay for the very First time in #Thalapathy65! Get ready for the Action! @actorvijay pic.twitter.com/XJFMwv7dhZ

It is also reported that Thalapathy 65 will be a pan-Indian movie. In fact,  Manoj Paramahamsa has mentioned about it in his tweet. Vijay’s last film Master had also gotten a pan-India release. It had released in Tamil, Telugu, Kannada and Hindi languages.

It is Official Now !!#Manojparamahamsa to handle the Camera for #Thalapathy65 🔥

The makers are yet to confirm which actress will be paired opposite Thalapathy Vijay in this Nelson Dilipkumar directorial. Anirudh Ravichander has been roped in as the film’s music composer. Stay tuned for further updates!

(The above story first appeared on LatestLY on Feb 25, 2021 10:08 AM IST. For more news and updates on politics, world, sports, entertainment and lifestyle, log on to our website latestly.com).