Thalapathy 65: Nawazuddin Siddiqui Approached To Play the Antagonist in Vijay’s Next Actioner – Reports

Thalapathy Vijay's last release Master was a blockbuster at the ticket window. While Vijay's fans are still basking in the success of his last release, we hear an update from his next titled Thalapathy 65. Reports hint that Nawazuddin Siddiqui is approached to play the antagonist in the South film. Read on. 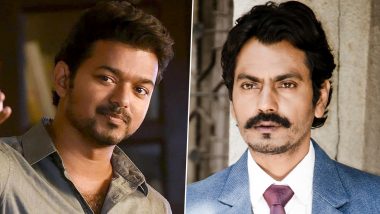 Thalapathy Vijay's last release Master was a blockbuster at the ticket window. It literally revived the big screen business as the flick was released in theatres. Ahead, it also got premiered on an OTT platform. While Vijay's fans are still basking in the success of his last release, we hear an update from his next titled Thalapathy 65, which helmed by Nelson Dilipkumar. According to a report in Pinkvilla, Scared Games star Nawazuddin Siddiqui is approached to play the antagonist in the South film. Reports hint Nawaz spoke to the director while he was in London shooting for Sangeen. Thalapathy 65: Shooting Of Vijay’s Film With Nelson Dilipkumar To Commence From April 2021?

A close source associated with the movie told the portal, "Thalapathy 65 has a very important role for the antagonist and the makers thought that Nawaz fits the part well. The actor has heard the script, however, he is yet to sign on the dotted line. If all goes as planned then Vijay and Nawaz will lock horns in Thalapathy 65,” The source also added that the film is expected to go on floors in June 2021.

Well, this is indeed a great piece of news for all Nawaz fans, as we all know how good he is in playing a baddie on the silver screen. And on top of it, Vijay and Nawaz in one frame, the deal absolutely looks interesting. It was in December 2020, when Thalapathy 65 was officially announced on social media. Rashmika Mandanna to Be Paired Opposite Vijay in Thalapathy 65?

Workwise, while Nawaz will soon start filming for Sara Ra Ra, on the other hand, Nelson Dilipkumar’s upcoming project Doctor is all set to release in March. Meanwhile, what do you think of Nawaz and Vijay locking horns? Tell us your views in the comment section below.

(The above story first appeared on LatestLY on Feb 18, 2021 07:41 PM IST. For more news and updates on politics, world, sports, entertainment and lifestyle, log on to our website latestly.com).