Thalapathy 65: Shooting Of Vijay’s Film With Nelson Dilipkumar To Commence From April 2021?

In December last year it was confirmed that Nelson Dilipkumar is onboard to direct Thalapathy 65 that stars Kollywood superstar Vijay in the lead. 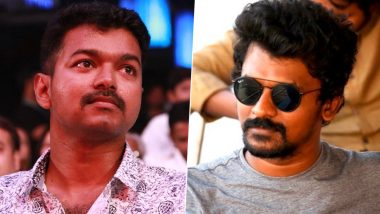 Thalapathy Vijay’s last film Master has turned out to be a blockbuster worldwide. The film has also premiered on the streaming giant Amazon Prime Video from January 29. And now, the superstar is gearing up to shoot for his next mass entertainer that will be helmed by Nelson Dilipkumar. In December last year it was confirmed that Nelson is onboard to direct Thalapathy 65. Now the buzz is that the shooting of the film will commence from April 2021. #Thalapathy65: Thalapathy Vijay's Next Project Announced, Sun Pictures Share an Energy Filled Teaser For Fans.

There are several reports doing rounds on the internet regarding the shooting of Thalapathy 65. Industry expert Christopher Kanagaraj has shared a tweet citing that the shooting of Thalapathy 65 will begin from April and Vijay has given two months dates for the same. 24am Cinema has given a breakdown of the film’s schedule. It mentions that other than Chennai, the makers will film a small portion in Mumbai and a major sequence will reportedly take place in Dubai.

Vijay - Nelson film shoot is expected to begin from April 2021.

On The Shooting Schedule Of Thalapathy 65

#Thalapathy65 apart chennai, a small schedule in Mumbai and a big schedule planned in Dubai

Car chase sequences to be shot in Dubai

Like JD, again Thalapathy Vijay to play a urbanic character with different shades

Nelson is preplanning everything! Shoot to start from April Mid pic.twitter.com/SwFoXTcthw

There has been no official update shared by the makers yet on this untitled project’s shooting schedule. The music of Thalapathy 65 will be composed by Anirudh Ravichander and the film is produced under the banner of Sun Pictures.

(The above story first appeared on LatestLY on Jan 31, 2021 09:14 AM IST. For more news and updates on politics, world, sports, entertainment and lifestyle, log on to our website latestly.com).