On the occasion of Keerthy Suresh's birthday, a teaser has been released by Miss India makers which shows Suresh' amazing BTS moments. The video showcases Suresh shooting for the film and also having a fun time with her co-stars. Watch the BTS video inside. 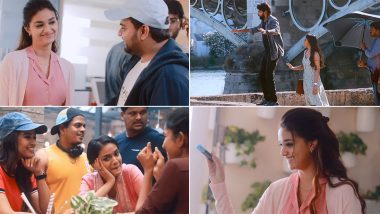 Keerthy Suresh celebrates her birthday on October 17 and as the National-Award Winning actress turns 28, the makers of her upcoming film Miss India have now shared a special song featuring her amazing BTS moments from the sets. Keerthy has turned out to be one of the most sought after actresses after her brilliant performance in Mahanati. Her upcoming film though, Miss India is a bilingual Tamil-Telugu film. On the occasion of her birthday, it has certainly been a treat for the fans considering first we got to see a new still of the actress from her upcoming film with Nagesh Kukunoor. We also got to see the first look poster of her other film, Penguin where she is seen as a pregnant lady in the film. Keerthy Suresh’s Film with Narendra Nath Is Titled Miss India! National Award-Winning Actress Looks Drop Dead Gorgeous in This Title Teaser Video.

The video showcases Keerthy working hard and giving her best as she works on Miss India. The film's teaser has already been released and it certainly looks like it is going to be an amazing journey. The teaser already showed us how the film has been shot across locations and in this BTS video too, we get a glimpse of that. The video also features a song composed by Thaman S.

Miss India stars Jagapathi Babu, Naveen Chandra, Sumanth S and Poojitha Ponnada in key roles. The female-centric film seems to be an interesting journey of Keerthy Suresh's character and may also revolve around self-discovery. Keerthy Suresh Birthday: 5 Best Movies of the 2019 National Award Winning Actress That You Must Not Miss.

An announcement on the release date of the film is yet to be made but we would love to love it if the makers soon release a full trailer of the film. As for this amazing BTS video, we bet you won't be able to take your eyes off the gorgeous Keerthy Suresh who takes simplicity to another level in this.

(The above story first appeared on LatestLY on Oct 17, 2019 05:02 PM IST. For more news and updates on politics, world, sports, entertainment and lifestyle, log on to our website latestly.com).