Valimai: Dhruvan Roped In For Thala Ajith’s Film? All You Need To Know About The Malayalam Actor

Valimai is the upcoming Tamil film starring Thala Ajith in the lead. The latest rumour that is doing rounds on social media is that Malayalam actor Dhruvan has been roped in for this action entertainer. 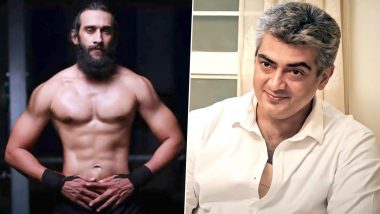 Valimai is the upcoming Tamil film starring Ajith Kumar aka Thala Ajith in the lead. Directed by H Vinoth, the makers are yet to announce the film’s release date. Film’s producer Boney Kapoor shared in an interview that the shooting of the film will be wrapped by February 15. The latest rumour that is doing rounds on social media is that Malayalam actor Dhruvan has been roped in for this action entertainer. However, the makers of Valimai have not shared any official update on it yet. Valimai: Release Date Of Thala Ajith’s Film Not Finalised Yet, Says Boney Kapoor.

Dhruvan is known for his works in Malayalam Cinema. He shot to fame for his performance in the film Queen that directed by Dijo Jose Antony, in which he plays the character Balu. His upcoming projects include Prithviraj Sukumaran and Suraj Venjaramoodu starrer Jana Gana Mana and Mohanal’s upcoming flick Aaraattu. If reports of Dhruvan starring in Valimai is true, it would be intriguing to watch him alongside Thala Ajith.

Stylish Young Malayalam Actor #Dhruvan on Board for #Valimai 👌#HVinoth is Doing Something Extraordinary for Kollywood 💥 pic.twitter.com/1JByYvhhoz

Talking about the release of Valimai, Boney Kapoor has stated that the release date is yet to be finalised. Many fans are assuming that the film could be released on the occasion of Thala Ajith’s birthday that is on May 1.

(The above story first appeared on LatestLY on Feb 11, 2021 02:37 PM IST. For more news and updates on politics, world, sports, entertainment and lifestyle, log on to our website latestly.com).