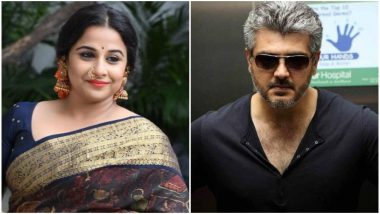 Vidya Balan and Thala Ajith to come together for Tamil remake of Pink (Photo Credit: Instagram)

After marking her Telegu debut with NTR biopic, Vidya Balan is all set to foray into Tamil cinema with Thala Ajith's remake of hit Bollywood movie, Pink. Yes, the film that starred Amitabh Bachchan, Taapsee Pannu, Kirti Kulhari and Angad Bedi was always eyed by the Tamil superstar and he wanted to remake it in his cinema. While the news of Ajith essaying Big B's role was out already, the reports of Vidya coming on board were recently confirmed by producer Boney Kapoor. The Dirty Picture actress sure has some big plans of expanding her horizon to the regional cinema and one can only tag it as a smart move. NTR Biopic New Posters: Vidya Balan as NTR's Wife Basavatarakam Looks Convincing and Beautiful!

In his conversation with Mid-Day, Boney Kapoor confirmed and elaborated on Vidya's role in the Tamil remake. He said, "I wouldn't call it a special appearance. There are certain changes that the director [H Vinoth] that has incorporated to suit the Tamil market, and Vidya's character has been accordingly written." So the actress won't essay any role from the Bollywood flick but her character has been specially written and will be separately introduced. Meanwhile, the hunt for an actress to play Taapsee's role is still on. Dulquer Salmaan in Karwaan, Akshay Kumar in 2.0 to Vidya Balan in NTR Biopic, Nithya Menen in Mission Mangal: Celebs Crossover in Cinema.

(The above story first appeared on LatestLY on Jan 05, 2019 05:38 PM IST. For more news and updates on politics, world, sports, entertainment and lifestyle, log on to our website latestly.com).