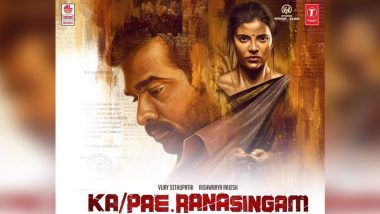 Ka Pae Ranasingam is one of the many movies that released on a streaming platform, skipping the theatrical release due to the COVID-19 pandemic. But, it is one of the few movies that released under the pay-per-view model. Now, as per reports, Ka Pae Ranasingam has earned over Rs 9.2 crore on the OTT with 470,000 bookings and counting. That's a  big feat. The price for one viewing of the movie is Rs 199. The movie is available on Zeeplex, Zee5 and through channels on various dish services. The movie starring Vijay Sethupathi and Aishwarya Rajesh released on October 2. Ka Pae Ranasingam Teaser: Vijay Sethupati and Aishwarya Rajesh Present a Powerful Social Commentary Highlighting the Plight of Farmers (Watch Video).

It is a great feat for the movie to achieve those sales numbers in just five days. However, to be noted, the official channel is yet to disclose any news about the collections. Muthiah Muralidaran Biopic: Vijay Sethupathi To Play The Titular Role In MS Sripathy’s Directorial (View Poster).

Ka Pae Ranasingam is a social drama, that has Vijay in the role of a farmer and Aishwarya play his wife. The duo is seen standing up for the rights of farmers and how the corporate sector and politicians trample all over the sons of the soil for their personal gains and profits. The hard-hitting drama's teaser has promised an interesting watch. The reviews for the film have also been satisfactory. Laabam Trailer: Vijay Sethupathi and Shruti Haasan’s Upcoming Social Drama is the Topical Conversation We Need (Watch Video).

(The above story first appeared on LatestLY on Oct 08, 2020 07:01 PM IST. For more news and updates on politics, world, sports, entertainment and lifestyle, log on to our website latestly.com).