Production company Movie Train Motion Pictures has confirmed that Vijay Sethupathi has been roped in the Muthiah Muralidaran biopic. 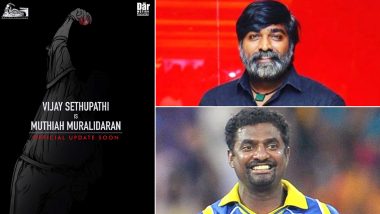 Vijay Sethupathi in and as Muthiah Muralidaran (Photo Credits: Twitter)

Since last year there have been rumours doing rounds that south superstar Vijay Sethupathi has been roped in and as Muthiah Muralidaran in the biopic. However, there was no official update on it. Almost after a year, here is the official announcement by the makers of this upcoming film. Production company Movie Train Motion Pictures has shared a poster across social media platforms and confirmed that Vijay Sethupathi has been roped in the Muthiah Muralidaran biopic that will be directed by MS Sripathy. Muttiah Muralitharan Biopic: Vijay Sethupathi to Play Former Sri Lankan Cricketer?

Muttiah Muralitharan, also spelt Muralidaran, is the former professional cricketer of the Sri Lankan team. He is indeed one of the most successful bowlers in international cricket. While sharing this amazing news, the makers shared a poster that is a sketch in a bowling action. The legendary Sri Lankan cricketer is the first wrist-spinning off-spinner in the history of this game. His unique bowling action has often grabbed eyeballs.

Vijay Sethupathi In And As Muthiah Muralidaran

Muthiah Muralidaran biopic will be produced under the banners of Movie Train Motion Pictures and Dar Motion Pictures. The makers haven’t shared any other details of the cast or the technical crew. In the past we have seen biopic made on several sports personalities especially on cricketers MS Dhoni and Mohammed Azharuddin. The upcoming ones include Mithali Raj and a sports drama on Kapil Dev. Stay tuned for further updates!

(The above story first appeared on LatestLY on Oct 08, 2020 12:31 PM IST. For more news and updates on politics, world, sports, entertainment and lifestyle, log on to our website latestly.com).