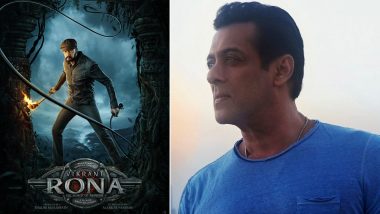 After Chiranjeevi, Mohanlal and Simbu, Bollywood superstar Salman Khan, who has worked with Kannada superstar Kichcha Sudeepa in 'Dabangg 3', will be launching the release date teaser of upcoming Kannada film 'Vikrant Rona' in Hindi on April 2. Vikrant Rona Deadman’s Anthem Out! Kichcha Sudeep Is Savage in the First Glimpse From His Thriller (Watch Video).

The film will be released in five different languages including Kannada, Tamil, Telugu, Malayalam and Hindi. The makers have strategically and extravagantly planned the promotions of the film. With four of the country's biggest stars coming together to support and root for the film, 'Vikrant Rona' promises an unprecedented cinematic experience. Vikrant Rona: Kiccha Sudeep’s Film’s Teaser And Release Date To Be Shared On April 2!

Additionally, the film, directed by Anup Bhandari, is also expected to be released in Arabic, German, Russian, Mandarin, and English. 'Vikrant Rona', which also stars Jacqueline Fernandez, Nirup Bhandari and Neetha Ashok, is presented by Zee studios, produced by Jack Manjunath under his production Shalini Artss, and co-produced by Alankar Pandian of Invenio Origins.

(The above story first appeared on LatestLY on Apr 02, 2022 09:45 AM IST. For more news and updates on politics, world, sports, entertainment and lifestyle, log on to our website latestly.com).