Why Are You: Rana Daggubati Drops the Teaser Of His Upcoming Animated Comedy Show Which Looks Quirky and Fun! (Watch Video) 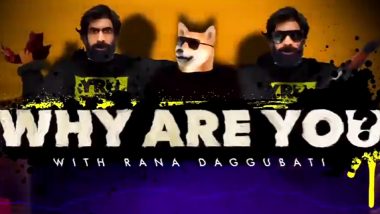 Actor Rana Daggubati is one talented genius and if you thought only acting and producing was his thing well, we have a surprise for you. The actor is all set to helm a unique animated comedy show that will feature 'realish' people. Confused? Well, the teaser of the show has now been dropped by the actor and guess what, it looks amazingly quirky and we can't wait to find out exactly what the show's format will be. The teaser doesn't give much except that it has Rana doing some really cool stuff with animated filters and we're loving whatever this is. The show has been titled "Why Are You" which makes us even more curious about it. #NoFilterNeha Season 5: Rana Daggubati Reveals His Honeymoon Destination and It's a Very Romantic Choice.

Sharing the teaser of the show, Rana took to Instagram and wrote, "Why are you? with @ranadaggubati. A quirky irreverent fiction comedy with real-ish people." In the interesting teaser, we see Rana Daggubati's animated version speaking to an animated version of Salvador Dali, a Spanish Surrealist artist and the question Rana asks him is "Why are you". Later in the teaser, there's also a hilarious Money Heist reference. Comedian Danish Sait who has been leaving netizens in splits with his recent sketches has come board as a writer for this show. Sait taking to Twitter thanked Rana and said, "Thanks @RanaDaggubati for bringing me on board as one of the writers on this show Upside-down face @VamBho and I had a great time working with you, Sid and Kaushik."

On the personal front, Rana was recently in the news for his marriage with Miheeka Bajaj. The actor tied the knot in Hyderabad with his girlfriend in a gorgeous close-knit ceremony on August 9. Adorable pictures of the couple soon went viral on social media as fans of the actor blessed and congratulated the couple.

(The above story first appeared on LatestLY on Sep 20, 2020 01:21 PM IST. For more news and updates on politics, world, sports, entertainment and lifestyle, log on to our website latestly.com).