1962: The War In The Hills is a war drama series directed by Mahesh Manjrekar. The series inspired by the 1962 India-China war is streaming on Disney+ Hotstar. 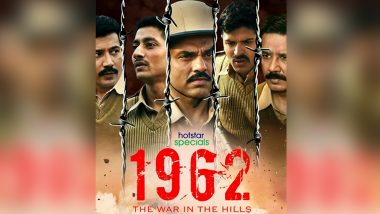 1962: The War In The Hills is a war drama series directed by Mahesh Manjrekar. The series inspired by the 1962 India-China war is streaming on Disney+ Hotstar. It features Abhay Deol in the lead and Mahie Gill, Sumeet Vyas, Rohan Gandotra, Hemal Ingle, Akash Thosar, Rochelle Rao, Meiyang Chang and Anuup Sonii in key roles. Reported to be one of the fiercest battles ever fought, this battle was led by Major Suraj Singh, the role essayed by Deol. 1962 – The War in the Hills Review: Abhay Deol’s Disney+ Hotstar Series Is a Tedious Watch (LatestLY Exclusive).

Although a few have praised the performances of the star cast, many are disappointed with every characters role. Some have stated that the battle sequences in this ten-episode series has been ‘tragically choreographed’. Let’s take a look at some of the reviews of 1962: The War In The Hills. 1962 The War in the Hills Trailer: Abhay Deol's Series Relives Indian Army's Valour Against the Chinese in One of History's Most Unforgettable Chapters (Watch Video).

Hindustan Times – Forget tackling themes such as PTSD and the human cost of war; The War in the Hills is an ultimately disrespectful portrayal of brave soldiers, because it shows them essentially as unthinking clones incapable of any emotion besides patriotism and innocent love. The show’s bizarre writing aside, it’s a train wreck on a technical level, too.

NDTV Movies – In a war drama, the men inevitably get more of the footage. Abhay Deol is perfectly cast. Sumeet Vyas and Akash Thosar, both cast against type, are up to the challenge. However, Annup Sonii, saddled with an underwritten role, gets the short shrift. Mahie Gill and Hemal Ingle are especially good. Pooja Sawant, Pallavi Kulkarni and Rochelle Rao, too, make their presence felt.

Bollywood Life – Aside from Mahie Gills’ acting (which only gets to shine in a handful of scenes where her character isn’t butchered), there literally isn’t a single redeeming aspect about 1962 The War in the Hills.

FilmiBeat – 1962: The War In The Hills finds a balance between the big picture and the struggles of the common man. What works best for the show is that the story has been told without any villains to shoulder the blame.

This is what the critics have to say about 1962: The War In The Hills. If you have managed to watch this latest web series, share your thoughts with us in the comment section below.

(The above story first appeared on LatestLY on Feb 26, 2021 11:41 AM IST. For more news and updates on politics, world, sports, entertainment and lifestyle, log on to our website latestly.com).

Comments
Tags:
1962 The War In The Hills 1962 The War in the Hills Review Abhay Deol Disney+ Hotstar Mahesh Manjrekar
Comments
You might also like