Amazon Prime series, Paatal Lok turned out to be an acting debut for bhajan-singer and ex-Bigg Boss contestant, Anup Jalota. He recently opened up about his first acting stint ever in through this series and claimed that it was easy as compared to his stint in Bigg Boss 12. 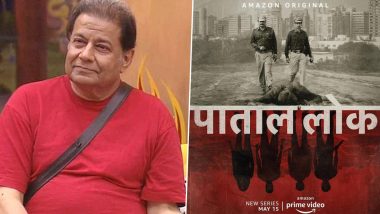 Amazon Prime series, Paatal Lok has got everyone impressed. Backed by Anushka Sharma, the crime drama has shown some fine performances and fans are demanding a second season. The series also turned out to be an acting debut for bhajan-singer and ex-Bigg Boss contestant, Anup Jalota. He recently opened up about his first acting stint ever in through this series and claimed that it was easy as compared to his stint in Bigg Boss 12. Amid COVID -19 Pandemic, Anup Jalota in Awe of Medical Care by BMC After Travelling From London to India, Appeals Passengers to Cooperate.

Anup had entered the Salman Khan's reality show with his 'student' Jasleen Matharu. The otherwise non-controversial housemate grabbed the headlines for his alleged relationship with Jasleen inside the BB house. Jasleen Matharu Confirms Being In A Virtual Relationship With A Bhopal-Based Surgeon, Courtesy, Anup Jalota (Details Inside).

In his recent interview, he was quoted saying how he did a 'tough role' than Pataal Lok by being in Bigg Boss. “It’s never too late to take up a new challenge. And this was an easy one. Playing the Dalit political leader was not difficult at all. After all, I had been on Bigg Boss which is the toughest role to perform for any actor," iwmbuzz.com quoted him saying. Paatal Lok: From Gory Murders to Child Abuse, 13 Moments in Anushka Sharma’s Amazon Prime Series That Are Bound to Leave You Shell-Shocked! (SPOILER ALERT).

Speaking of his experience while working here, he added, "It was called Jamuna Paar and I was asked to play a politician. The offer came from Anushka Sharma’s office. They informed me that I’d have to shoot for eight days in Chitrakoot and then a couple of days in Mumbai. They said I had the correct look for it. I agreed without a second thought." He also mentioned that he is very much ready to be part of more shows as an actor if offers come by him. Well, we wonder if we get to see more of Jalota on the silver screen in the near future.

(The above story first appeared on LatestLY on May 21, 2020 05:00 PM IST. For more news and updates on politics, world, sports, entertainment and lifestyle, log on to our website latestly.com).