Jennifer Winget looks beautiful beyond words in this yellow outfit. check out her latest pictures. 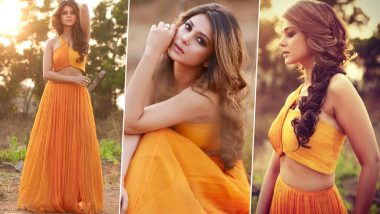 Jennifer Winget is by far one of the most renowned Indian television actresses of all time. The actress has managed to remain one of the most sought-after TV actresses in a career spanning at least seventeen years. She has won hearts of many with her obsessed, psychotic character Maya Mehrotra in Sony Entertainment’s much-celebrated show Beyhadh in Sony TV's popular daily soap Beyhadh. While her role gained a lot of popularity, Winget achieved a lot of appreciation for the same. Jenny later charmed us with her portrayal of Zoya in Bepannaah, however, the actress is currently on a break from TV. Jennifer Winget’s Picture With Stray Dogs From Her Vacation Is Just PAW-FECT

Jennifer, who is currently enjoying her 'me time', however, never fails to treat fans to her bold, sensuous and glamorous pictures. Jenny, who is quite a social media sensation and has a huge fan base on Instagram, took to the photo-sharing to share a couple of pictures from her latest photoshoot and we can't stop gushing over her. Jennifer Winget Is Soaking Up the Sun in a Hot Orange-Black Bikini – View Pic

Check Out Jennifer Winget's Pictures From Her Latest Photoshoot Here:

In one of the pictures, the actress captioned her post as, "There’s sunshine in my soul today ...and we’ll just leave it at that! Cheers, my dearies!" While another picture's caption read, "Here we stand!” ...deep-rooted, strong, fiery and fierce."

There’s sunshine in my soul today ...and we’ll just leave it at that! Cheers, my dearies!

In other news, it is being said that Jennifer and Kushal Tandon's popular drama Beyhadh, that went off air in 2017, is all set to go on floors and will premiere by April. Apparently, Jennifer, who wowed us with her brilliant performance in season 1, will be part of the show, but Kushal is in no mood to do the show! However, nothing has been officially confirmed about the second installment of Beyhadh series by the makers yet. But at a recent awards ceremony, Jennifer was asked about the show's return with the second season, the actress didn't deny it but asked to wait for it patiently. Watch this space for further updates.

(The above story first appeared on LatestLY on May 09, 2019 09:21 AM IST. For more news and updates on politics, world, sports, entertainment and lifestyle, log on to our website latestly.com).