Recently a few names started to do rounds on social media, the list of contestants for Bigg Boss 14, and the latest the name reported to be participating in the show is CarryMinati aka Ajey Nagar. 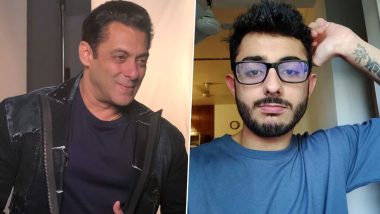 The controversial reality TV show, Bigg Boss 14, is all set to go on-air from October 3 on Colors TV. The makers had recently released the fourth promo of the show and announced about the grand premiere. This season will once again see Salman Khan as the host of the show. It is also said that Bigg Boss 13 winner Sidharth Shukla would be co-hosting the show for a special segment along with the superstar. However, there’s no confirmation on it yet. Recently a few names started to do rounds on social media, the list of contestants for Bigg Boss 14, and the latest the name reported to be participating in the show is CarryMinati aka Ajey Nagar. Bigg Boss 14 Premiere Date Announced: Salman Khan's Show Will Welcome its New Contestants on October 3.

CarryMinati is one of the most popular YouTubers. This streamer from Faridabad is known for his comedic skits is the most subscribed individual creator on YouTube India. He has more than 24 million subscribers on his channel CarryMinati. Besides this, he also runs another channel named Carryislive that is for gaming and live streams. The latest buzz is CarryMinati has reached Mumbai and is currently quarantined in a hotel. He will reportedly be joining the controversial show after he completes his quarantine period. However, there is no official confirmation on it yet. Bigg Boss 14: Jasmin Bhasin, Eijaz Khan, Naina Singh, Nishant Singh Malkani, Karan Patel, Aly Goni and Others, Is This the List of Participants On Salman Khan's Show?

The names of other personalities of who are also said to be participating in Bigg Boss 14 include Jasmin Bhasin, Nikki Tamboli, Aly Goni, Naina Singh, Sara Gurpal, Nishant Singh Malkani and Pavitra Punia. Stay tuned for more updates from the world of entertainment!

(The above story first appeared on LatestLY on Sep 16, 2020 09:13 AM IST. For more news and updates on politics, world, sports, entertainment and lifestyle, log on to our website latestly.com).