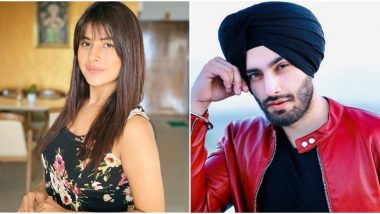 Bigg Boss 14 has started already and fans are busy picking their favourite names of this season. While we were still struggling to come to terms with the hangover of Bigg Boss 13, the makers are back with a new season that promises enough entertainment. The contestants' list this year includes names like Pavitra Punia, Eijaz Khan, Rubina Dilaik, Abhinav Shukla, Nikki Tamboli, Jasmin Bhasin, Rahul Vaidya, Shezad Deol, Jaan Kumar Sanu and others. While Nikki is already being trolled for imitating Shehnaaz Gill from the last season, Shehzad, on the other hand, is a self-proclaimed admirer of the Punjab ki Katrina Kaif.  Bigg Boss 14 Episode 1 Precap: Jasmin Bhasin Gets into Verbal Argument with Nikki Tamboli, Radhe Maa Gets Preachy (Watch Video).

Before entering the house, Shehzad spoke to Zoom digital about his favourite contestants from the past season. And that obviously had Shehnaaz's mention. Talking about the same, he said, "My favourite contestant has been different throughout different seasons that I have watched. But one contestant, who is not only my favourite but also a favourite of nation and makers of another reality shows, is Shehnaaz. She was a different character, she was a different prototype. It has never happened in Bigg Boss before that Shehnaaz has come so far and gone ahead with that kind of naiveness and cuteness."

Going further, he also mentioned about how they both come from the same region. "I take immense pride and I am proud of the fact that she is fellow Punjabi, a Jattni, she is from my land, region. And after her, I am getting the opportunity to present Punjab and Punjabi people in the Bigg Boss house," he said. Well, with such kind words, we won't be surprised if her fandom decides to support Shehzad this season. Bigg Boss 14: Netizens are Excited for this New Season, Start Picking their Favourite Contestants (Check Out Tweets).

Bigg Boss will air on Colors channel at 9:00 pm. The show is ideally set for a three-month run time but the makers may decide to extend it additionally by a month or so.

(The above story first appeared on LatestLY on Oct 04, 2020 09:54 AM IST. For more news and updates on politics, world, sports, entertainment and lifestyle, log on to our website latestly.com).