Bigg Boss 14: Jasmin Bhasin Confesses Her Love to Aly Goni, Asks Him to Win Over Her Family (Watch Video)

Looks like the cat is finally out of the bag! As on tonight's episode of Bigg Boss 14, Jasmin Bhasin will confess that she is also madly in love with Aly Goni. Yes, it is happening and fans of #Jasly it's time to rejoice. Check it out. 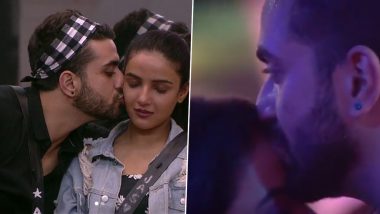 Looks like the cat is finally out of the bag! As on tonight's episode of Bigg Boss 14, Jasmin Bhasin will confess that she is also madly in love with Aly Goni. As per the precap, December 31, 2020, inside the BB house will be all about partying and welcoming the New Year in style. In the video, we see Arshi Khan, Rahul Vaidya and Rakhi Sawant as the three contenders fighting to be the next captain. The task is such that whoever among the three attracts the maximum number of inmates to their bash will become the new captain. Amid this task, we see Jasmin expressing her feelings to Aly. Bigg Boss 14 December 31 Synopsis: Rakhi Sawant Tears Rahul Mahajan’s Dhoti in a Task; Will She Be the Next Captain?

It so happens that while dancing with Aly, Jasmin tells him that “Mere gharwalon ko mana lena (Win over my family), you love me so much.” To which, Goni replies with a forehead kiss. For the one's who aren't aware, Jasmin was here referring to the time when Aly had said that if her parents disapprove, he will leave her. Well, the way Jasmin and Aly are going this strong, we definitely smell there is more than just friendship. Bigg Boss 14: Aly Goni and Jasmin Bhasin Allegedly Discuss Their Contract Deets, Bad TRPs, Show's Extension In This Unverified Viral Audio Clip.

Ending the year with a #Jasly moment!#ChampionAlyGonipic.twitter.com/liFieTS3cr

From the time Aly entered the Bigg Boss house because of Jasmin, there has been buzz that the due are seeing each other. However, whenever quizzed about the same, both of them have denied it and termed it as a close friendship. But time and again, we've seen love in their eyes on the reality show. Lastly, we hope #JasLy finally sets the record straight. Stay tuned!

(The above story first appeared on LatestLY on Dec 31, 2020 10:25 PM IST. For more news and updates on politics, world, sports, entertainment and lifestyle, log on to our website latestly.com).