Bigg Boss 14: Jasmin Bhasin’s Fans Get Furious After Learning About Her Possible Eviction From the BB House, Trend #BringJasminBhasinBack on Twitter

Nominated contestants including Jasmin, Aly, Abhinav Shukla and Rubina Daliak are seen in tears as one of the couples would be separated after the eviction in a promo. Showrunner Salman Khan too gets emotional. 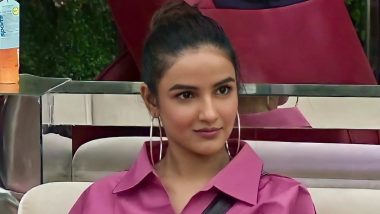 The controversial reality show, Bigg Boss 14 has a massive fan following. We have seen actors gain die-hard fans during their stint inside the house in the past and this season is no different. Rahul Vaidya, Aly Goni, Rakhi Sawant, Vikas Gupta are one of the few contestants who became internet trends instantly when something major happened with them in the BB house. Fans came out in support of their favourite stars and started trends on Twitter as well. Jasmin Bhasin too has been a part of this Twitter fandom trend from time to time. Bigg Boss 14: Jasmin Bhasin Eliminated From Salman Khan’s Reality Show - Reports.

Now, ever since the reports suggesting that Jasmin will be evicted today during the Weekend Ka Vaar episode started floating around, fans have been trending the hashtag #BringJasminBhasinBack on Twitter. Around 1.25 million tweets have been shared asking Bigg Boss not to evict the Dil Se Dil Tak actress. The trend started after Colors shared an emotional promo of the upcoming Weekend Ka Vaar episode where the nominated contestants are struggling hard to say goodbye.

Bring jas back the one person who is humble in the house n I hope all can understand bring jas back to c trio jas,rkv,aly again we hope we can c again@IlhamGoni@jasminbhasin@AlyGoni#BringJasminBhasinBack pic.twitter.com/sXyIfMTpf5

Its for the first time since his first season as host we have never seen @BeingSalmanKhan so emotional on Evicton of any contestant.

He really feel sad for her.

She should be back in the show. She can't go like this. #BringJasminBhasinBack pic.twitter.com/C4YAz9KSQe

Girl who are active in the house from day one,give 100% in all task,always entertained us,most of day trending, always in top 2 in Ormax chart,more than 60% content coming from her,how can thay eliminate her?Ab kya show me logo ko apple khate huye dekhenge #BringJasminBhasinBack

Guys we need to raise our voice because jasmine deserves to be in the show, please make it trending no 1 till they bring jasmine back #BringJasminBhasinBack

Nominated contestants including Jasmin, Aly, Abhinav Shukla and Rubina Daliak are seen in tears as one of the couples would be separated after the eviction. Showrunner Salman Khan too gets emotional and according to the handles like The Real Khabri and Bigg Boss Tak, Jasmin will say goodbye to the house. It is also being said that Jasmin will be possibly sent into a secret room, sighting the example of past seasons and Jasmin's popularity. And seeing how the fans have promised not to watch the show if Jasmin gets evicted, we think the makers will surely come up with something interesting. Bigg Boss 14: Can Jasmin Bhasin Turn Rumoured Beau Aly Goni’s Entry To Her Advantage?

(The above story first appeared on LatestLY on Jan 10, 2021 10:54 AM IST. For more news and updates on politics, world, sports, entertainment and lifestyle, log on to our website latestly.com).