Bigg Boss 14 November 20 Episode: Kavita Kaushik Becoming the New Captain of the House and Other Major Highlights of BB 14

From Nikki Tamboli supporting Kavita Kaushik in the captaincy task to the latter having an argument with Jasmin Bhasin, here's everything that happened on November 20's episode. 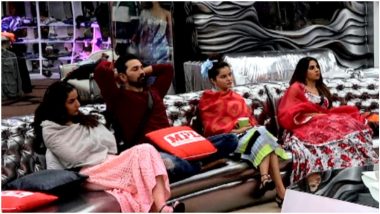 The new season of Bigg Boss 14 is currently going on in full swing with contestants battling it out in the new captaincy task. Kavita Kaushik is locking horns with Jasmin Bhasin and the task involves them sitting inside a box. Jasmin earlier started a debate when she tagged Rubina Dilaik as someone who has a superiority complex. This claim was however refuted by Shardul Pandit and Naina Singh post their elimination from the show. To see if Jasmin manages to become the new captain of the show and to read other major updates from tonight's episode, keep scrolling below.  Bigg Boss 14: Naina Singh Lashes Out At BB14 Makers, Says Her Eviction Was 'Pre-Planned' and 'Unfair'.

The captaincy task is currently going on in full swing with Kavita Kaushik and Jasmin Bhasin locking horns. The competition is to sit inside a box for the maximum number of hours. To support Kaushik in the task, Pavitra grabs an insect and puts it inside Bhasin's box. Seeing this, Aly comes to her rescue once again and Jasmin infuriates Pavitra by saying she's doing nothing on the show.

Nikki supports Kavita Kausik in her captaincy task by saying she doesn't even mind picking up her potty to make her win the competition. Nikki sides with Kaushik after Eijaz tries to slid into Rubina's team. Nikki is desperate for Kavita to win the task and takes all efforts to help her win.

Rubina and Abhinav had their first fight inside the house when he refuses to play dirty in the ongoing captaincy task. While Rubina insists he should help Jasmin and prompt Kavita to step outside her box, he simply refuses to interfere. Bigg Boss 14: Shardul Pandit Feels Rubina Dilaik Can Win the Show!

Rahul Makes Kavita the New Captain of the House

Rahul, who earlier had a pact with Jasmin and Aly ditches the duo and makes Kavita the new captain of the house. While the reason for his decision is not known, this is his typical behaviour.

After Rahul makes Kavita, the new captain of the house, Rubina and Abhinav have a word with Aly saying that they can't trust him (Vaidya) anymore. Jasmin, meanwhile, interferes their conversation and asks them to stop playing this blame game. She believes they didn't give 100 per cent in the task and so shouldn't sulk.

(The above story first appeared on LatestLY on Nov 21, 2020 12:00 AM IST. For more news and updates on politics, world, sports, entertainment and lifestyle, log on to our website latestly.com).