Bigg Boss 14 getting exciting with each passing day and just in case you have missed on October 21st episode, fret not, as we have got you covered. Check out the full story. 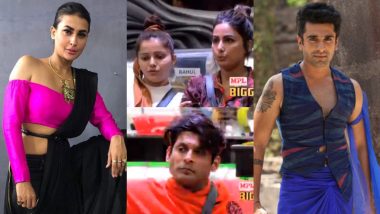 Bigg Boss 14 saw one of the most explosives fights in the history of the reality show when Gauahar Khan, Hina Khan slammed Sidharth Shukla and team for breaking a rule amid the task. However, that’s something done and dusted as we get to see the inmates inside the house getting sentimental on today’s episode. As the mentors and their 14 days journey inside the ghar finally came to an end. Sidharth, Hina and Gauahar bid adieu to one and all. From Nikki Tamboli sobbing to Jasmin Bhasin missing the seniors a lot, we saw a different side of the contestants. In case, you missed the episode, here are the highlights. Bigg Boss 14 October 20 Episode: From Hina Khan, Gauahar Khan Slamming Sidharth Shukla to Rubina Dilaik’s Break Down Over Salman Khan’s ‘Derogatory’ Comment- 5 Highlights of BB 14.

After Sidharth Shukla’s team cheats in the 'game over' task, the decision about who will be the team leaving the show was pending since yesterday. Now, we see Bigg Boss asking the three mentors to come to a conclusion. However, that does not happen as it is Hina, Gauahar vs Sidharth. But finally, Bigg Boss goes by the majority and declares Sid's team as the losing one. This means that members from team Shukla: Eijaz and Pavitra exits the house with the mentor. P.S: Nikki gets safe as she is a confirmed contestant.

Seeing the losing team - Pavitra Punia, Eijaz Khan and their mentor Sidharth getting kicked out of the house, the inmates burst out in tears. Nikki Tamboli looks the most affected as she breaks down and sobs. The aura of the house gets a bit sad and Jasmin Bhasin also cries.

We all knew that one day this was supposed to happen as after Sid, mentors Hina and Gauahar also say goodbye to all the housemates. During this process, each and every inmate gets emotional as they were kind of attached to the seniors. We see Nikki Tamboli and Jaan Kumar Sanu crying the most. FYI, Rubina tells Hina that she was her motivation and power. Quite a sentimental episode.

Suddenly, out of nowhere, we see many men in PPE kits entering the Bigg Boss house and siren loudly playing as if it is an emergency. Amid this, the masked man destroys a wall of the house and we get to see a new part of the Bigg Boss house which was not revealed before, and it is called Red Zone. But the twist is that Pavitra and Eijaz are part of it and will be given chances to go back to the green zone.

That’s it, guys! Episode 14 of the reality show was indeed filled with many ups and downs. Not only the contestants, even we will miss the mentors and their voice inside the ghar. Now, the real game begins, let us see how it goes Stay tuned!

(The above story first appeared on LatestLY on Oct 22, 2020 12:12 AM IST. For more news and updates on politics, world, sports, entertainment and lifestyle, log on to our website latestly.com).