It's just two weeks for the grand finale of Bigg Boss 14 and last night (Feb 10), we saw Abhinav Shukla getting evicted from the reality show. This led to a storm online, and celebs called his elimination from BB 14 unfair. Check it out. 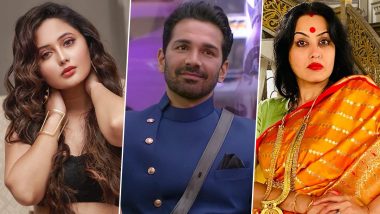 It's just two weeks for the grand finale of Bigg Boss 14 and last night (Feb 10), we saw Abhinav Shukla getting evicted from the reality show. However, he was not voted out by the audience, but it was the connections who decided his fate. With this, Rubina Dilaik, Nikki Tamboli, Devoleena Bhattacharjee (as Eijaz Khan's proxy), Rakhi Sawant, Aly Goni and Rahul Vaidya are the ones still in the race. But as soon as Abhinav was out of the house, fans blasted the makers for giving the power of elimination to the connections and not the audience. Even many celebs echoed the same voice. Bigg Boss 14: Abhinav Shukla Eliminated from Salman Khan’s Reality Show in a Surprise Mid-Week Eviction?

As Kamya Punjabi, Rashmi Desai, Shardul Pandit and many were in a state of shock. Celebs expressed how Abhinav was a gentleman throughout the show and played the game with a lot of class and compassion. While Kamya called it an unfair, Rashami tagged Abhinav as the winner and the stars poured their heart out. Bigg Boss 14: Rakhi Sawant’s Love for Abhinav Shukla Reminds Us of Her Obsession for Amit Sadh in Season One!

Are u serious?????? They are deciding the faith of a contestant who has been in the house since day one maintaining his dignity n playing so well.... so bloody unfair #BB14 @ColorsTV @ashukla09 u are already a winner for me!

If #AbhinavShukla has been voted out without audience votes it’s the biggest travesty.

It’s making me sick to my stomach.

To think what all this guy went thru, to be evicted like this.

Highly unfair I loved #AbhinavShukla as a player and amazing human 💞. Really wanted to see you & ruby in top 2. But for me you are a winner. & trust me universe is backing you both. #rubinav ✊🏻❤️@RubiDilaik @ashukla09 #BB14 🥇

I still remember those horrible nights when Rubina and Abhinav both were nominated together and we have voted for #AbhinavShukla day - night to make sure he gets safe.

If it is over, then you went in a gentleman and come out a gentleman. You handled yourself with grace and maturity and deserved to be in the finals and probably win in my eyes! Take a bow bro👏👏👏#AbhinavShukla #BigBoss14 #RubinaDilaik pic.twitter.com/CVBPfdl9NA

Well, we don't know who's right and who's wrong here, but the show is ending on February 21 and there will be only one winner. Having said that, Abhinav Shukla's journey on BB 14 was quite a bumpy ride. Initially, he was tagged as a bring contestant, but after Rakhi Sawant's entry, he grabbed many eyeballs. Stay tuned!

(The above story first appeared on LatestLY on Feb 10, 2021 11:48 AM IST. For more news and updates on politics, world, sports, entertainment and lifestyle, log on to our website latestly.com).