Bigg Boss 14: Salman Khan Hikes Fee For BB Once Again? Here's How Much He Is Reportedly Charging (View Post) 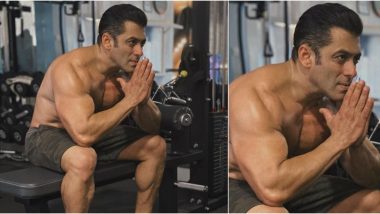 Bigg Boss without Salman Khan will not have the same charm, mazaa and even success ratio that it has enjoyed for over the past few seasons. Be it Salman and his kadi ninda of the housemates or even breaking norms and entering the house to console a broken contestant (Rashami Desai in BB13) and also wash dishes and clean the toilets (also in BB13), Salman Khan's Weekend Ka Vaar episodes are never missed. Salman Khan To Shoot Bigg Boss 14 Announcement Promo From Panvel Farmhouse, Show Postponed Because of Khatron Ke Khiladi 10 (Deets Inside).

Bigg Boss 14, originally said to be arriving on television screens in October, is said to be pushed back to November and names like Muskaan Kataria, Shubhangi Atre, Akanksha Puri, Mansi Srivastava, Jasmin Bhasin among other names have reportedly been approached to participate for the show.

(The above story first appeared on LatestLY on Jul 06, 2020 03:13 PM IST. For more news and updates on politics, world, sports, entertainment and lifestyle, log on to our website latestly.com).