The time has come which all Bigg Boss fans have been waiting for as finally the Weekend Ka Vaar episode featuring Salman Khan is here. This is the first-ever WKV with Salman and trust us it was entertaining and how. Check it out. 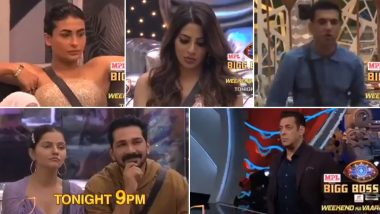 The time has come which all Bigg Boss fans have been waiting for as finally the Weekend Ka Vaar episode featuring Salman Khan is here. Like every year, this time too, we will be seeing the superstar at his best guiding the inmates to be on the right track on the reality show. This is the first-ever WKV with Salman and trust us it was entertaining and how. Right from Nikki Tamboli's shopping time, Abhinav Shukla being schooled by the host to no eliminations this week, Saturday's episode was LIT. Just in case you missed tonight's episode, read on the happenings here. Bigg Boss 14 Weekend Ka Vaar October 10, 2020 Synopsis: Salman Khan Schools Abhinav Shukla; Eijaz Khan Makes A Shocking Revelation.

The bulldozer task literally brought the ugliest side of many contestants. The task was that two contestants will face the torture by other housemates and if they pass the test, they'll win. Amid the same, Abhinav Shukla's face gets sprayed by many. To this wifey, Rubina gets angry and yells and screams asking all to be human in the task and not a villain. She even screams for the doctor's help when she sees Abhinav in a bad condition. However, nothing major happens.

Nikki is among the most loved contestant by the mentors as well as the audience. Giving her performance on the show a shoutout, Salman on tonight’s episode assigns Tamboli a fun task wherein she had to shop from the BB mall within a time span of two minutes. And as expected, the lady literally picks all things from the mall. Well, she indeed was great in grabbing all those luxuries amenities. Well done! Bigg Boss 14 Weekend Ka Vaar Preview: Eijaz Khan's Past Love Life To Get Exposed On National TV (Watch Video).

Abhinav Shukla Is No Sidharth Shukla

Salman Khan on Bigg Boss is known to be a mentor who shows the contestants the reality as it is. The superstar on the first WKV explains Abhinav Shukla that he needs to buckle up and snatch the limelight. He also tells Abhi that there was (Sidharth) Shukla from season 13 and then this season as him a Shukla who is just a spectator inside the house. Salman also expresses that Abhinav should also stop overpowering wifey Rubina Dilaik.

The promo out by the makers about Ejaz's raaz from the past was so epic that it made one and all feel what's the scoop. However, nothing huge came out but instead, it was more about how his past wrongdoings with regards to his love life is making him awkward on the reality show. Even Salman Khan advised him to stop thinking much and be himself.

Nikki Gets The Confirmed Tag

The girls this season are literally awesome. As we see Pavirta and Nikki giving their best in the tortuous immunity task and finally getting safe from nominations. From spray, dirt, shaving cream to whatnot, the two babes battled it out and showed what is women power all about. That's not the only thing, as the mentors also make a decision and choose Nikki over Punia. And with this, Nikki becomes the first confirmed contestant of the show. You go, girl!!! Bigg Boss 14: Pavitra Punia Reveals the Reason Behind Her Breakup With Pratik Sehajpal (Watch Video).

That was all the happenings from Bigg Boss 14's first Weekend Ka Vaar and we bet that the upcoming episode will be more entertaining where the real side of the contestants will be out in the ballon task. Stay tuned!

(The above story first appeared on LatestLY on Oct 10, 2020 11:04 PM IST. For more news and updates on politics, world, sports, entertainment and lifestyle, log on to our website latestly.com).