Have Rajeev Sen and Charu Asopa Buried Their Differences? Sushmita Sen's Brother Shares Photos With Wife From Their Sangeet Ceremony!

Sushmita Sen's brother Rajeev Sen and his wife Charu Asopa have been making a lot of noise these days, but not for good reasons. The couple who got married on June 16, 2019, is reportedly going through a lot of issues in their marriage. Read on. 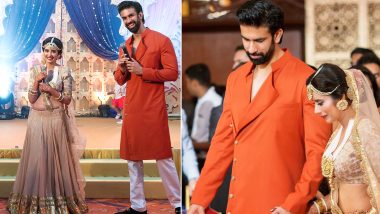 Sushmita Sen's brother Rajeev Sen and his wife Charu Asopa have been making a lot of noise these days, but not for good reasons. The couple who got married on June 16, 2019, is reportedly going through a lot of issues in their marriage. While the two are trying their best to paint a picture that all is cool between the pair, on the other hand, rumours suggest otherwise. Rajeev and Charu have been also staying away from quite a long time where the man is residing in Delhi and the lady is in Mumbai. Rajeev Sen Says Charu Asopa Is Being Brainwashed And He Will Expose The Culprit Once He Finds Them.

Although Sen and Asopa recently shared a glimpse of themselves talking on a video call, things are still unclear whether the couple is going strong together or not. Well, indeed the pair's after shaadi love story is getting complicated as days after deleting pictures of their wedding ceremony. Now, Sen has shared two pictures with Charu from their sangeet ceremony. He also went sans any caption to the pic post. We wonder, what's cooking? Charu Asopa Claims Husband Rajeev Sen Moved Out Days Before their First Anniversary, Insists No One is Brainwashing Her.

Check Out The Pictures Of Rajeev And Charu Below:

Earlier, in a chat with Bombay Times, Rajeev had addressed the rumours and said, "Why would I move out of my own house? I can’t stop laughing at these claims. I have three homes — one each in Delhi, Mumbai and Dubai. I guess someone close to Charu is brainwashing her because she is a simple and innocent girl.

After the same BT, even spoke to Asopa who replied to Sen's statement saying," No one is brainwashing me. I am mature enough to make my own decisions — something that I have always done. Main hamesha se apne decisions khud leti aayi hoon. Maybe, he was brainwashed into deleting our pictures from his social media handles." Stay tuned!

(The above story first appeared on LatestLY on Jul 31, 2020 01:28 PM IST. For more news and updates on politics, world, sports, entertainment and lifestyle, log on to our website latestly.com).