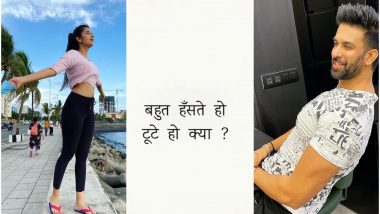 The buzz of trouble between TV actress Charu Asopa and Sushmita Sen's brother Rajeev Sen does not seem to die down. Well, it did when Rajeev recently clarified that their marriage was not in trouble, but if Charu Asopa's Instagram up load is anything to go by, then definitely is something unresolved between the couple. For those who are unaware, here's a small gist. After dating for 4 months, Charu and Rajeev tied the knot first in a court marriage on June 7 and then in a lavish wedding in Goa on June 16, 2019. However, one year later, it was reported by a leading daily that after a huge fight, Rajeev had flown to Delhi on May 29, followed by Charu dropping her hubby's surname from her social media accounts. Sushmita Sen's Brother Rajeev Sen Rubbishes Reports of Trouble in his Paradise With Wife Charu Asopa (Details Inside).

However, Rajeev quickly dismissed these rumours and in a conversation with another entertainment portal, he had revealed that he was in Delhi for work and that this distance did not mean he and Charu were facing trouble in their conjugal life. From Charu Asopa’s Cryptic Post to Rajeev Sen’s Dinner Date Pic, Fans Confused If All Is Well Between Sushmita Sen’s Brother and His Wife.

But Charu Asopra's Instagram post says otherwise. And this had led to a flood of comments below the actress' post where fans are asking her to stay strong during these troubled times.

Back when news of trouble brewing between the couple had started picking up, a source close to the couple had told Bombay Times, "Charu and Rajeev had serious compatibility issues right from the beginning. Things finally came to a head and Rajeev left for Delhi. The two have not been in touch since then. While Charu has dropped his surname on social media, he has blocked her from all channels of communication." Well, only Rajeev and Charu can confirm or deny this speculation and they should - once and for all.

(The above story first appeared on LatestLY on Jul 08, 2020 09:33 AM IST. For more news and updates on politics, world, sports, entertainment and lifestyle, log on to our website latestly.com).