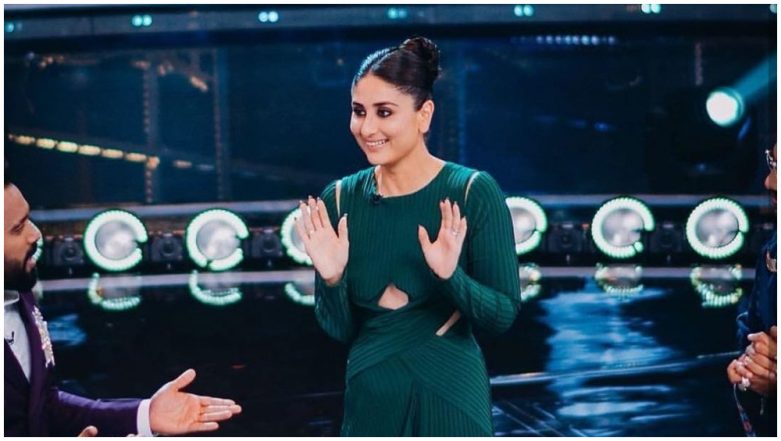 Kareena Kapoor is an all-rounder. After ruling Bollywood and winning hearts as a radio host, she made her debut on TV as well. While fans would have loved to see her work on a fictional show on TV, for now, they had to settle with the actress judging a reality show. Kareena was roped in as one of the judges for Dance India Dance season 7. Today, the first episode of the reality show aired and the internet is in love with it. Twitterati cannot stop talking about Kareena. #KareenaonDanceIndiaDance was trending on Twitter for over an hour. Fans are in awe of Kareena's dress to the way she talked to the contestants. Kareena Kapoor Khan's Diva Look in Bottle Green Thigh-High Slit Gown Will Capture Your Heart Instantly! View Pics.

Kareena is definitely making the best of her TV debut. She will surely become one of the most sought out names on TV as well. What a glorious day. First, we learn that Kareena will be reuniting with Aamir Khan for the movie on Udham Singh. Then, the actress wows her with her stint on TV. Certainly an awesome day for Kareena fans. Read what some of the fans are saying about the actress on Twitter.

Kareena is so amazing as judge in dance india dance! 💖#KareenaKeSaathDID7 ✨ pic.twitter.com/Bh8j2ojPAN

Some just tuned in to watch Kareena on the show

We loved it as well

I love the way bebo is talking so much in Hindi on DID.😍#KareenaKeSaathDID7

So, that was all about Kareena's TV debut. Many more episodes to come. And we are pretty sure in the coming weeks, Kareena will give us a lot to talk about. From her awesome peppy personality to her impeccable fashion sense, we are sure we'd be given so much to talk about Kareena. And, of course, we are looking forward to seeing her dancing more.