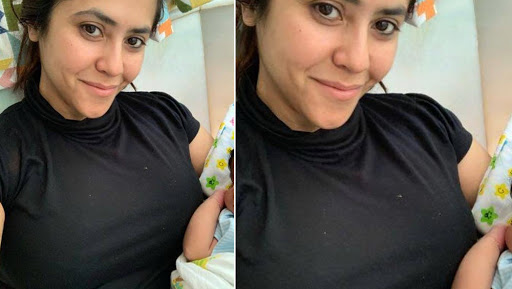 Recently, TV Czarina Ekta Kapoor welcomed her first child on January 27 via surrogacy, just like her brother Tusshar Kapoor. She broke the news to her fans and followers on Twitter. Ekta was fighting to become a mother for the past 7 years and her prayers have finally been answered. Just a couple of days ago, sharing glimpses of her newborn baby on social media, which instantly went viral, the newbie mommy lovingly named her son Ravie Kapoor after her father Jeetendra’s original name Ravi Kapoor. On Wednesday, we got our hands on another picture of Ekta with her infant son that has surfaced online. However, we can only see the baby’s hands in the picture. Well, the picture has gone viral among netizens. Ekta Kapoor Gives Us First Glimpse of Her Baby Boy Ravie Kapoor and It’s Adorable! (See Pic Inside)

According to the latest reports, the TV producer will be throwing a lavish and grand naamkaran ceremony at her residence on February 11, 2019. Needless to say, the ceremony is going to be one gala affair, where who’s who of television and Bollywood industries are expected to be present. Ekta Kapoor’s Doctor Reveals Why the TV Czarina Opted for Surrogacy

Here's the picture of Ekta Kapoor with her son Ravie:

Back in 2016 when Tusshar Kapoor welcomed his son via surrogacy, it was said to have set a huge example in the society for encouraging the procedure, more importantly, Tusshar broke a lot of taboos surrounding surrogacy by taking this step. And looks like Ekta is now paving the same way for everybody else. We congratulate Ekta on her baby boy and now eagerly await for the lady’s announcement and also a glimpse of her baby.

Ekta had earlier shared this picture of Ravie Kapoor. Take a look!

On the professional front, in April last year, Ekta launched her digital platform Alt Balaji, where she could experiment with content that was not suitable for viewership on television. And even before completing a year, Alt Balaji is one of the most viewed OTT platforms in the country. In 2018, Ekta launched her pet project Kasautii Zindagii Kay 2, which stars Erica Fernandes, Parth Samthaan and Hina Khan (who plays the antagonist) in the lead roles. Watch this space for further updates.