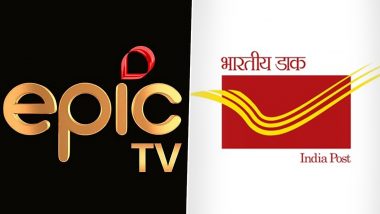 Mumbai, January 16: A new television show will soon trace the story of India Post, which is the worlds largest postal network.

Commenting on the show, Arundhaty Ghosh, member, operations, Postal Board, India Post, said: "We are excited to showcase what goes into running the largest postal network of the world to the citizens of this country. This will definitely be a one-of-a-kind show." Regiment Diaries Season 2 Returns On EPIC Channel (Watch Video).

The show will air in the form of a limited series on EPIC channel, and will take the viewers across the country and behind the scenes of India Post.

"India Post has touched the lives of Indian citizens in many ways. From being a channel of communication to being instrumental in financial inclusion, this institution has been a beacon of hope for many people who are till date disconnected from the modern world," Tasneem Lokhandwala, head, content & programming, EPIC Channel said.

(The above story first appeared on LatestLY on Jan 16, 2020 09:43 PM IST. For more news and updates on politics, world, sports, entertainment and lifestyle, log on to our website latestly.com).