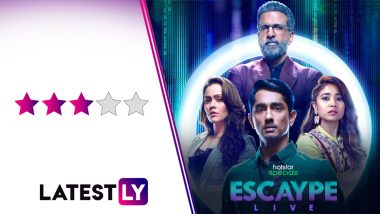 Escaype Live review: The first thing that pops up into your head is why is there a 'Y' in the name. We are glad to tell you there's  no numerology involved. In fact, the series explains why they makers felt the need to add another letter to the title. Escaype Live, streaming on Disney Hotstar, broaches the terrifying and dark side of going viral. While it does a splendid job in putting forth the frailties of the social viral world, the execution gets patchy and uneven. Escaype Live Trailer Out! Siddharth, Jaaved Jaaferi, Shweta Tripathi Sharma’s Thriller Series on Dangerous TikTok Culture Streams on Disney+ Hotstar from May 20 (Watch Video).

Escaype Live is an app that built its empire on user generated content much like the Tik Tok. It gives its users a platform to showcase their talent for likes and diamonds. To rake in some more moolah, the app makers announce a contest. Whoever wins the maximum diamonds at the end of it will get a prize money of Rs 3 crore.

That lets things to spiral which makes victims out of a parkour expert son of a washerman Neelaya (Ritvik Sahore), a girl from Northeast Hina (Plabita Borthakur) resorting to playing sexual fetishes of men for money and acceptance, a power-obsessed twisted prankster Drunkie (Sumedh Mudgalkar), a stubborn, audacious and desperately fame hungry young kid Rani (Aadyaa Sharma) going to any lengths to be famous, the deputy manager of a bank Rajkumar (Rohit Chandel) fighting to accept 'her' true self.  But no one is invincible and thus, an insider Krishna (Siddharth) decides to expose Escaype Live for what it is.

The series gets right to the point the moment it opens with a disturbing and dreadful climax to Rani's story. It sets the tone just right for the rest of the series. Siddharth Kumar Tewary has spectacularly summarised the adverse effects of 15 seconds of fame on these social media apps. He also does a great job in presenting the difference between fact and fiction on the screens. The stories have been curated so well that a lot of them leave you shocked, appalled and frightened. It is truly commendable the way Tewary has tried to talk about gender discrimination, regionalism, sexual abuse, class divide and more.

Tewary has also managed to sketch a few characters really well. Siddharth's Krishna is a conservative middle class software engineer with hypocritical ideologies. While he falls for a girl who is the exact opposite of what he staunchly believes in, he gets his sister's boyfriend arrested for dating her. Rani, the most frightening character of a kid obsessed with social media hype is fantastically written and portrayed.

But the problem arises soon enough. While the pace is okay, stashing the narrative with so many separate stories affects the execution a lot. Midway into the series, the flow gets repetitive and tad boring. Even when a lot is happening, nothing excites you as much. Also, a few things are just plain weird.  Why will an elite, high-society family agree to their son's whims of hosting a stranger? Worse, the mother doesn't even chuck the stranger out of the house even after he plays a deadly prank on her son? Why did Hina take so long to get out of the rut she got into with her employer Maya (Swastika Mukherjee) when the solution was present from the start? Siddhart's change in mindset happened rather quickly without letting his prejudices establish themselves. That dilutes the worth of the character. Escaype Live: Siddharth Opens Up About His Disney+ Hotstar Series, Says ‘It Has Been a Great Experience for Me’.

Well, Escaype Live opened with seven episodes. The rest of the two episodes will be out on May 27. Hopefully, we will get some closure on the characters.

Watch the trailer of Escaype Live

Performances range from fairly decent to extremely strong. A great round of applause goes to Aadyaa Sharma for portraying how these apps are polluting the minds of young kids. She is simply amazing! Rohit Chandel gives a lot of heart to the character of a woman trapped in a man's body while Siddharth is eye pleasing both as a looker and in his character. Jaaved Jaaferi has too less time to flourish while Waluscha D’Souza adds the corporate edge to her character well.

Escaype Live has the right intentions at heart but gets slighted by an uneven flow structure. Escaype Live streams on Disney+ Hotstar.

(The above story first appeared on LatestLY on May 23, 2022 12:58 PM IST. For more news and updates on politics, world, sports, entertainment and lifestyle, log on to our website latestly.com).