Hawkeye: Jeremy Renner Opens Up About His Character in the Disney+ Hotstar Series

Vera Farmiga and Florence Pugh are also a part of 'Hawkeye', which is currently streaming on Disney+Hotstar. Hawkeye teams up with a 22-year-old skilled archer and his biggest fan, Kate Bishop played by actor Hailee Steinfeld, to unravel a criminal conspiracy 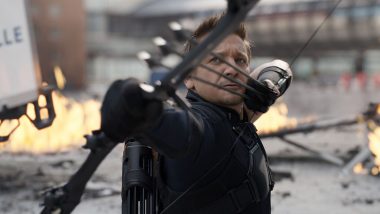 Wednesday turned out to be a great day for the fans of superhero projects as Marvel Studios' 'Hawkeye' released today. Helmed by Rhys Thomas and directing duo Bert and Bertie, the series stars Jeremy Renner as Hawkeye, the ace archer sets on a journey to go back to his family but his trysts with outlaws impede his journey in the post-blip world. To defeat them, Hawkeye teams up with a 22-year-old skilled archer and his biggest fan, Kate Bishop played by actor Hailee Steinfeld, to unravel a criminal conspiracy. Hawkeye: Know More About Echo, Alaqua Cox’s Mystery Character Shown at End of Episode 2 and Her Connection to Kingpin.

Opening up about his character, Jeremy said, "In Avengers: Age of Ultron, they cemented the family life. I think that was a huge thing for the original six Avengers. It answered, 'What are we doing all of this for?' Having that secret family and grounding it in his values--that was a great leap for the character.Fans would see the character return to the big screen in Captain America: Civil War in 2016 as part of Team Cap, and again in 2019's Avengers: Endgame to help all of the heroes defeat Thanos." Hawkeye Review: Hailee Steinfeld Adds Occasional Doses of Fun to Otherwise Okayish Opening Episodes of Jeremy Renner’s Marvel Series (LatestLY Exclusive).

He added, "But during the five years preceding Endgame, Clint Barton went to the dark side as Ronin. He lost his whole family in the blip, and then he took his pain and rage and sadness out on every bad guy on the planet. Everyone dealt with those losses in a different way--Clint went full-on vigilante. Justified or not, it's a giant weight on him because he knew he was going outside the moral code of what he is. That's where we start the series--things that happened in the past catch up to him." Vera Farmiga and Florence Pugh are also a part of 'Hawkeye', which is currently streaming on Disney+Hotstar.