Anshuman Jha says his new release Hum Bhi Akele Tum Bhi Akele is special for him because it was his last film that his mother saw before she died last year. The film is currently streaming on Disney+ Hotsar. 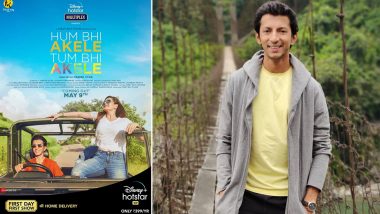 The film also stars Zareen Khan. The story revolves around a road trip taken by a gay man and a lesbian woman from Delhi to Mcleodganj, and how they discover the true meaning of love and companionship during the trip. The actor says that the film was challenging to shoot. Hum Bhi Akele Tum Bhi Akele: Zareen Khan Opens Up About Playing a Gay Character in the Disney+ Hotstar Film.

"My training as an actor is not just to be the best I can, but to be the best I can in the worst circumstances. This character was challenging and even more so because of what was happening at home but I hope I have been able to do justice to Veer. And I am very grateful for the love coming for the film, especially from the LGBTQ+ community," he says. The film is currently streaming on Disney+ Hotsar.

(The above story first appeared on LatestLY on May 12, 2021 06:19 PM IST. For more news and updates on politics, world, sports, entertainment and lifestyle, log on to our website latestly.com).