Indian Idol 12 Winner Pawandeep Rajan: All You Need To Know About the Talented Singer Who Won the Reality Show!

Indian Idol 12 finally found its winner in Pawandeep Rajan after a wait of almost nine months. The talented singer lifted the winner's trophy along with Rs 25 lakh cash prize and a car. Congrats! 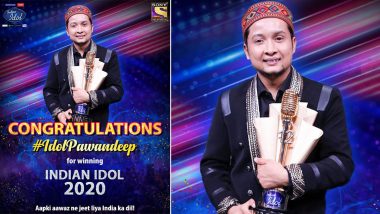 Pawandeep Rajan is the winner of Indian Idol 12. On the grand finale night which took place on August 15, the young man who hails from the city of Champawat, Uttarakhand took home the winner's trophy and also a prize money of Rs 25 lakh. Along with it, he also got rewarded with a brand new car. Co-contestant Arunita Kanjilal became the first runner-up of the show, followed by Sayali Kamble, Mohd Danish, Nihal Tauro, and Shanamukhapriya. Having said that, Pawandeep had a massive fan base and always made a buzz for his soulful performances. Indian Idol 12: Pawandeep Rajan, Arunita Kanjilal Recreate Shah Rukh Khan-Kajol’s Romantic Scene From Kuch Kuch Hota Hai (Watch Video).

As Pawandeep is crowned as the winner of the twelfth season of Indian Idol, let’s know a bit more about his life and more. As mentioned earlier, he comes from the northern side of India. However, we bet you didn’t know that he has also won The Voice India in 2015. Yes, this is the second time he has won a singing reality show. That’s not it, as Pawandeep has also sung songs for the movie Romeo N Bullet and is internationally renowned. He has performed in concerts in around 13 countries including Dubai, Malaysia, South Africa, and many more. Indian Idol 12: Fans Lash Out at Makers After They Chop Off Pawandeep Rajan’s Second Performance From The Latest Episode.

FYI, the Indian Idol 12 winner’s talent is in his genes as his father, Mr Suresh Rajan is also quite a known face as a Kaumani folk singer. His sister Jyotideep Rajan is also a singer. Talking about Pawandeep, apart from singing, he’s also superb with musical instruments like guitar, keyboard, tabla, piano, and dholak.  Indian Idol 12: Javed Akhtar Compares Contestant Arunita Kanjilal to the Legendary Lata Mangeshkar (Watch Video).

During his stint on Indian Idol 12, Pawandeep was linked with Arunita. To which while speaking to ETimes TV, Rajan said, “We have a musical relationship with each other. We like to jam together and talk about songs and music. I felt very lucky and proud that I have such talented singers as friends. We want to work together.” Indian Idol this year was judged by Anu Malik, Himesh Reshammiya, Sonu Kakkar and was hosted by Aditya Narayan. Stay tuned!

(The above story first appeared on LatestLY on Aug 16, 2021 09:34 AM IST. For more news and updates on politics, world, sports, entertainment and lifestyle, log on to our website latestly.com).