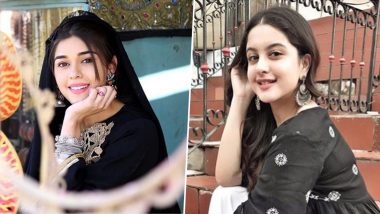 While twists and turns are the very core of a Hindi television show, the best twist was pulled off by the makers of Ishq Subhan Allah when they brought back their original lead actress Eisha Singh and she has replaced her replacement, actress Tunisha Sharma. Yes, you read that correctly. Tunisha had replaced Eisha in October 2019, but the latter has now been brought back as the main protagonist Zara, once again. It can be recalled that Eisha's on-screen pairing with debutant Adnan Khan, who plays Kabir on the show, was an instant hit with the masses and the two were also linked together in real life. Eisha Singh QUITS Ishq Subhan Allah Over Differences With Production House, Loses Her Film Too!.

Confirming the development to Bombay Times, Eisha revealed, "Ishq Subhan Allah was always my baby and it was difficult to hand it over to someone else. I had to leave the show because of another commitment and date clash. Having said that, Tunisha performed the role beautifully. I don’t know why she has been replaced. I am extremely emotional at the moment and the feeling of re-entering the show is indescribable." Ishq Subhan Allah's Lead Actor Adnan Khan Quits The Show (Deets Inside).

Well, looks like Adnan has stayed back on board and Eisha has been called back. A few days back, a television news portal had reported that as per rumours, both Eisha and Adnan have been given hefty paycheques to stay on board the show, that was all sett o wrap up but given an extension last minute.

Also opening up about reuniting with her old cast and crew and co-star Adnan Khan, Eisha was quoted as saying, "It’s great to have a co-actor, who is compatible and makes you comfortable. We are always on the same page and open to suggestions."

(The above story first appeared on LatestLY on Jul 03, 2020 04:42 PM IST. For more news and updates on politics, world, sports, entertainment and lifestyle, log on to our website latestly.com).