The Akhil Bharatiya Kayastha Mahasabha of Madhya Pradesh also threatened boycotting Kapil's show and also legal action against the concerned parties after the lockdown ended, if they had not got an apology. 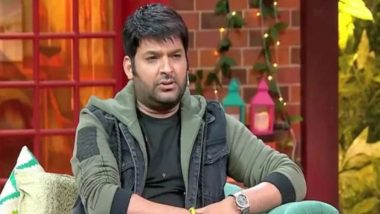 Back in March, one of the episodes that The Kapil Sharma Show aired, saw the comedian make fun of the Kayastha community's God- Lord Chitragupta And that was not taken to kindly by the community. While the trend '#SaySorryKapilSaharma' filled twitter, the community demanded an apology from Kapil and Sony. The Akhil Bharatiya Kayastha Mahasabha of Madhya Pradesh also threatened boycotting Kapil's show and also legal action against the concerned parties after the lockdown ended, if they had not got an apology. The Kapil Sharma Show To Re-Telecast Irrfan Khan and Rishi Kapoor's Episodes to Honour Late Actors' Memories (View Tweets)

Sony TV issued an apology on April 20, assuring the community that it was never their intent to hurt anyone's religious sentiments.

We sincerely regret that the sentiments of some of our viewers may have been hurt by certain references/comments on The Kapil Sharma Show aired on Saturday, 28th March ’20. We respect their sentiments and wish to assure them that was never our intent. pic.twitter.com/sn6JCLpHgJ

And now, Kapil Sharma also has issued an apology letter to the community on the behalf of himself and his entire team.

The Kapil Sharma Show has been on a sabbatical ever since the lockdown began, but the show has been re-airing old episodes from time to time. The comedian had made it to the news back in April for having donated Rs 25 lakhs to the PM Cares Fund to help fight against COVID-19.

(The above story first appeared on LatestLY on May 22, 2020 10:51 AM IST. For more news and updates on politics, world, sports, entertainment and lifestyle, log on to our website latestly.com).