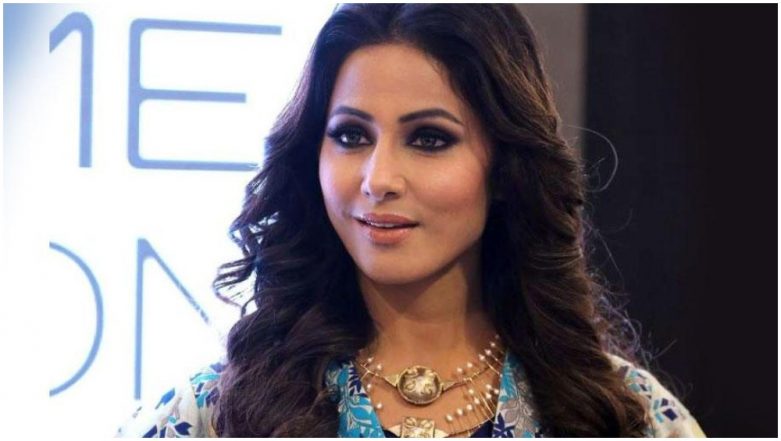 Hina Khan is one of the most beautiful and loved stars from the entertainment world and enjoys a huge fan following with 4.8 million followers on Instagram. The actress, who is winning hearts with her brilliant portrayal of the vamp character of Komolika in Ekta Kapoor's popular show Kasautii Zindagii Kay 2, is socially very active and her Instagram feed is all about good looks, good looks, and good looks. Hina, who never misses a chance to update herself well on social networking sites, is often seen sharing pictures and videos and keep her fans updated with her personal and professional life. She has managed to keep her fans busy with her social media posts. Hina Khan Aka Komolika of Kasautii Zindagii Kay 2 Gives Us the Perfect Friday Vibes in Her Latest Instagram Picture

The actress, who is socially very active, had recently made her debut on TikTok, an upgraded Musically app. She got a fabulous response on the social media platform, her half a million followers in a span of 2-3 days is proof to that! However, the actress recently deleted her TikTok account. Revealing the reason behind her sudden decision, the actress, in a FB live, said that she tried her best to cope up with the medium, but realised it's not her cup of tea.

For the unversed, TikTok is a media app for creating and sharing short videos. It is another craze in town after Musically.com and celebrities are not immune as TikTok sweeps the internet. Speaking of Hina, the Kasautii Zindagii Kay 2 star made five to six TikTok videos but had to delete the account owing to lack of time. The actress said, "See, I tried and I got very good response. It's like half a million followers in 2 days time..2 million hearts..lovely response..thank you so much for loving me on TikTok. But guys it's not my cup of tea. I don't have so much time for TikToks. I tried my best but then I realised mujhse nahi hoga."

She further added, "I know you have to make time to do things but I'm not able to do it. I have so many things in my hand. That's why I deleted my account myself although I got a fab response. Thank you from the bottom of my heart for giving me so much love. I made five-six TikToks and I was enjoying it but at the same time, I am very busy. I have lots of things to do. It's not my cup of tea. I didn't want to crash your expectations. But I am going to be on Instagram, but other than that (like Snapchat, Tik Tok), I don't think I can manage." Hina Khan Shows How to Beat the Summer Heat With a Cool Swim – Watch Videos

On the professional front, Hina Khan is currently winning hearts with her brilliant portrayal of the vamp character of Komolika in Ekta Kapoor's popular show Kasautii Zindagii Kay 2. However, she will be taking a break from TV shows as she is also gearing up to make her Bollywood debut in a film, where she will be seen sharing the screen space with veteran actor Farida Jalal.

As per BollywoodLife report, the actress has also signed another project, which will be directed by popular filmmaker Vikram Bhatt! The filmmaker's next is going to be in a women-centric film. Apart from these, Hina has also bagged Ekta Kapoor’s another project. Watch this space for more scoop and updates!