Khatron Ke Khiladi Reloaded: Here's What Jay Bhanushali Has To Say On Participating in Fear Factor Once Again 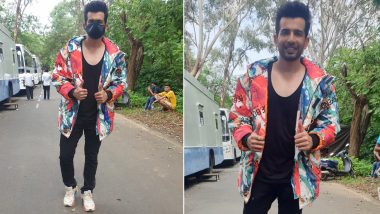 A special reloaded season of Khatron Ke Khiladi is making its way to our screens soon, with contestants from previous seasons coming back to compete with each other for the trophy once again. Actor and host Jay Bhanushali who was part of season 7 of the show, but had to voluntarily exit it back then a week before the finale due to an injury by falling from a helicopter during a task, is now all set to grace it once again with quite a fiery comeback! Khatron Ke Khiladi 10 Finale: Is Karishma Tanna the New Winner of Rohit Shetty's Stunt-Based Reality Show? Ekta Kapoor Drops A Hint.

Speaking about joining Khatron Ke Khiladi's special edition, Jay shares,"Being on season 7 of Khatron Ke Khiladi had helped me break so many of my fears, notions and really helped me build a very strong side for myself. It was an amazing journey and learning experience back then, but one I, unfortunately, couldn't take to the finale due to an injury sustained by falling from a helicopter, after which I had to exit the show." Khatron Ke Khiladi Reloaded: Jay Bhanushali Moves Out Of Home To Resume Shoot and Avoid Risking Family's Health (Deets Inside).

He continues, "This time though I am working on ensuring that my mental strength is well balanced as I feel that it can really help me pull well through the season. Khatron Ke Khiladi is all about mental strength, because if you set your mind to doing the task well and achieving a desired result, it helps tremendously! So my main aim is to keep myself mentally strong to physically do my best this time."

While hosting reality show's has been Jay's fortay for quite a while now, he hasn't actively participated as a contestant in any reality show since a long time. Says Jay, "Having coverered most of the reality shows as a participant in the past, I shifted my focus to hosting and anchoring which worked quite well for me over these years."

He went on to reveal, "Then the offer to participate in the upcoming season of Khatron came up and I just knew I had to take it up, because this is one show that really helps you strengthen yourself physically and mentally. Also the last time I participated in a reality show was also Khatron Ke Khiladi season 7, and now I am making my comeback as a participant in the new season, which I am quite happy about! Its definitely going to be a rollercoster ride like the last time, but one which I am eagerly looking forward to!".

(The above story first appeared on LatestLY on Jul 22, 2020 07:12 PM IST. For more news and updates on politics, world, sports, entertainment and lifestyle, log on to our website latestly.com).