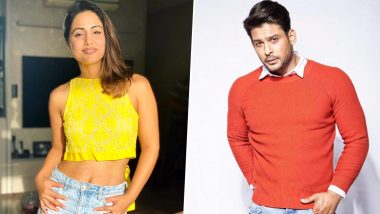 As exhilarating as Khatron Ke Khiladi 10 has been, the show will soon shoot its finale and wrap up. However, without much ado, there will be a special edition show where fans will get to see popular faces from the previous 10 seasons compete with each other and perform some daredevilry stunts. And for the same, names like Aly Goni, Jasmin Bhasin, Nia Sharma, Rashami Desai, Jay Bhanushali, Karan Wahi Rithvik Dhanjani and Haarsh Limbachiyaa have already given their nod. Khatron Ke Khiladi 10 Gets 8-Episode Extension, Rithvik Dhanjani, Nia Sharma, Aly Goni, Jasmin Bhasin To Shoot For Adventure Reality Show From July 21 (Deets Inside).

A while back, there were reports of how Tejasswi Prakash and Karan Patel from season 10 were also approached, but they refused the offer. And joining this list of names who will also not be seen on the show are that of Hina Khan and Sidharth Shukla. Khatron Ke Khiladi Reloaded: Jay Bhanushali Moves Out Of Home To Resume Shoot and Avoid Risking Family's Health (Deets Inside).

A report in Bombay Times states that while Hina was offered the special edition, Sidharth was never even approached in the first place. In fact, Hina even went on to tell the daily, "Yes, I was offered the show, but I am not doing it due to safety reasons. That’s all." And as for Sidharth, he was not offered the show, after all, he did take home the trophy for Khatron Ke Khiladi: Kabhi Peeda Kabhi Keeda (season 7) and took home a giant cockroach trophy!

A while back, actor Karan Wahi had confirmed his participation in the show to an entertainment portal and revealed that he was very excited. Jay Bhanushali too confirmed that he was doing the special edition of KKK and was in fact, moving out of his house that he shares with wife Mahhi Vij and three children, Tara, Rajveer and Khushi to ensure their safety.

(The above story first appeared on LatestLY on Jul 17, 2020 08:28 AM IST. For more news and updates on politics, world, sports, entertainment and lifestyle, log on to our website latestly.com).