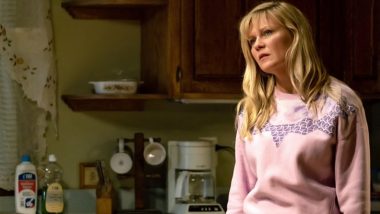 Kirsten Dunst in ‘On Becoming a God in Central Florida’ (Photo Credits: Twitter)

So she starts to use this system for the benefit of herself and her daughter so she's just trying to survive and this is what life has presented her," Dunst said. Talking about her role, she said: "My character Krystal is a pistol for sure! When you first meet her, she works at a waterpark. Pinocchio Remake: Ewan McGregor Talks About His Role in Guillermo Del Toro’s Next.

She's raising a daughter with her husband she's just making ends meet and is a pretty happy woman because she has a house and comes from poverty so for her when you first meet her, her life is exactly what she hoped for." The show will be available on SonyLIV from July 3.

(The above story first appeared on LatestLY on Jun 30, 2020 12:20 PM IST. For more news and updates on politics, world, sports, entertainment and lifestyle, log on to our website latestly.com).