While everyone is sane enough to decode their outings and pictures together, the fans still needed that confirmation from the horse's mouth and here it is. 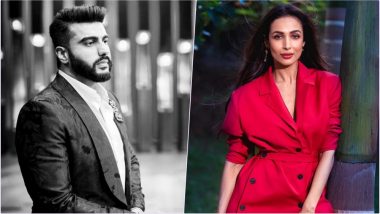 Fans are just sitting at the edge of their seats, still speculating about the thing that is cooking between Malaika Arora and Arjun Kapoor. The dating rumors of the actor-duo have been floating across the tinsel town since months now. In fact, the speculations have moved on from mere dating to wedding bells but the celeb couple was adamant on being mum on the same. However, to the pleasant surprise of the fans, the Chhaiyya Chhaiyya diva confessed on the national television a.k.a on Koffee With Karan 6 chat show, that she LIKES Arjun! Is Malaika Arora and Arbaaz Khan's Son, Arhaan Still Upset With Their Divorce? The Actress Answers....

If you follow the Bollywood gossips or even are slightly active on entertainment social media page, you are must be already aware of the fact that they have been playing hide n seek game with the fans. While everyone is sane enough to decode their outings and pictures together, the fans still needed that confirmation from the horse's mouth and here it is. Is Malaika Arora Flaunting Her Love for Beau Arjun Kapoor’s Family Through This Sweatshirt?.

In the latest episode of KWK 6, host Karan Johar shoots a question about some performance. When Kirron Kher mentions 'Arjun', Malaika says, "I like Arjun, this way or that way." KJo's expressions are a huge give-away! Also on the couch were Vir Das and Mallika Dua who reacted to this in a funny way. Check out the video here:

Speaking of the current situation, the couple flew off to Switzerland together. They'll be attending pre-wedding bash of Mukesh Ambani-Nita Ambani's son, Akash Ambani with Shloka Mehta. So expect some more snaps from this extravagant bash from this inseparable couple!

(The above story first appeared on LatestLY on Feb 25, 2019 10:16 PM IST. For more news and updates on politics, world, sports, entertainment and lifestyle, log on to our website latestly.com).