LOL-Hasse Toh Phasse: Arshad Warsi Reveals Why the Upcoming Amazon Prime Video’s Comedy Show Was a Dream Job for Him

Arshad Warsi along with Boman Irani hosts the upcoming comedy show LOL: Hasse Toh Phasse. Warsi says it was a dream job watching a set of comedians trying to make each other laugh. The show streams on Amazon Prime Videos from April 30. 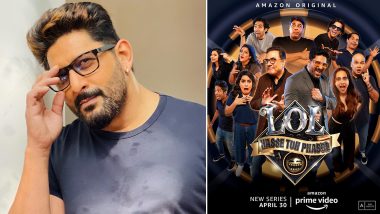 Where else do you get to see 10 of India's best comedians trying to make each other laugh, while you get the opportunity to just laugh at their jokes and have a great time sipping on tea and coffee, munching snacks, and having a grand lunch. This was one of the best experiences we have had on any project," Arshad said. OTT Releases of The Week: Michael B Jordan’s Without Remorse and Arshad Warsi, Boman Irani’s LOL- Hasse Toh Phasse on Amazon Prime Video, Mammootty’s One on Netflix and More.

Boman and Arshad will be referees and keep an eye on the 10 comedians on the show -- Sunil Grover, Gaurav Gera, Suresh Menon, Cyrus Broacha, Kusha Kapila, Mallika Dua, Aditi Mittal, Aadar Malik, Ankita Srivastava and Aakash Gupta, who will battle it out to be the "last one laughing". The show streams on Amazon Prime Video from April 30.

(The above story first appeared on LatestLY on Apr 27, 2021 07:07 PM IST. For more news and updates on politics, world, sports, entertainment and lifestyle, log on to our website latestly.com).