OTT Releases of The Week: Michael B Jordan’s Without Remorse and Arshad Warsi, Boman Irani’s LOL- Hasse Toh Phasse on Amazon Prime Video, Mammootty’s One on Netflix and More 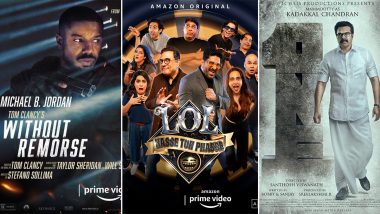 Several states have already shut down cinema halls, theatres and multiplexes due to huge rise in COVID-19 cases. It is more advisable to stay at home, be safe and if you are wondering how to spend time indoors, here's the way out for you. April 2021 is almost going to end and there are many interesting series and movies releasing on OTT platforms like Netflix, Amazon Prime Video, and Disney+ Hotstar. Talking about the biggest release of the week, it would be LOL- Hasse Toh Phasse, which is all set to kickstart on April 30 on Amazon Prime Video. The six-episode unscripted reality comedy show is surely going to be a laughing riot. It stars Arshad Warsi, Boman Irani, Sunil Grover, Aadar Malik, Kusha Kapila, Mallika Dua and more in the cast. LOL - Hasse Toh Phasse Trailer: Arshad Warsi, Boman Irani Bring a Fun Game With Standup Comedians That Takes a Drastic Twist (Watch Video).

Another big release of the week would be Without Remorse, which is all set to premiere on Amazon Prime Video on April 30. Helmed by Stefano Sollima, written by Taylor Sheridan and Will Staples. The action-thriller is based on the Tom Clancy's 1993 novel of the same name. The film stars Michael B. Jordan, Jodie Turner-Smith, Luke Mitchell, Jamie Bell and more. Coming to another mega release it would be One, which will stream on Netflix on April 27. The political-thriller directed by Santhosh Vishwanath features Mammootty, Joju George, Siddique, Murali Gopy, Mathew Thomas in lead roles. There are some Marathi and Kannada films too that are lined up to release on Netflix and Amazon Prime Video, and you might not want to miss them also. The list includes Marathi film The Disciple and Kannada film Roberrt.  Without Remorse Trailer Out! Michael B Jordan Stars in Amazon Prime Video's New Action Film (Watch Video).

(The above story first appeared on LatestLY on Apr 26, 2021 07:03 PM IST. For more news and updates on politics, world, sports, entertainment and lifestyle, log on to our website latestly.com).