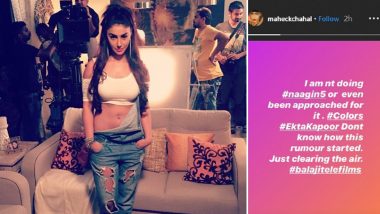 Producer Ekta Kapoor's Naagin 4 has met an unfortunate end... technically not! The news of the show going off air has been confirmed by Ekta Kapoor herself, and after the lockdown is lifted, Naagin 4 will come to an end after a 4 episode finale. Ekta Kapoor herself confirmed the development and revealed how Naagin 4 will end and immediately make way for Naagin 5. This will obviously lead to the whole cast of Naagin 4 bidding goodbye to the series. Ekta Kapoor Confirms Naagin 5, Says 'Naagin 4 Will End With A 4 Episode Fantastic Finale And We Will Immediately Get Into Naagin 5' (Watch Video).

And ever since, reports started doing the rounds of how Beyhadh 2 actor Shivin Narang being roped in for the show as the male lead. And while Shivin is yet to address these rumours, another name that is coming up is that of actress Maheck Chahal. Nia Sharma Refutes Rumours of High Remuneration Being The Reason For Being Ousted Out of Naagin 4, Says She Will Consider Accepting Pay Cuts In Future.

As per reports in Pinkvilla, a source has revealed to them that Maheck is one of the leading contenders for Naagin 5. The report read, 'As the channel has slashed down production costs by almost 30% for everyone, the makers are looking to cast a relatively newer face who is not too much of an expensive resource. Its SPLITSVILLE For Ashmit Patel and Maheck Chahal, Actors Call Off Engagement (Deets Inside).

However, Maheck has denied these claims vehemently. She posted a message on Instagram stating that she does not know where these rumours are coming from. 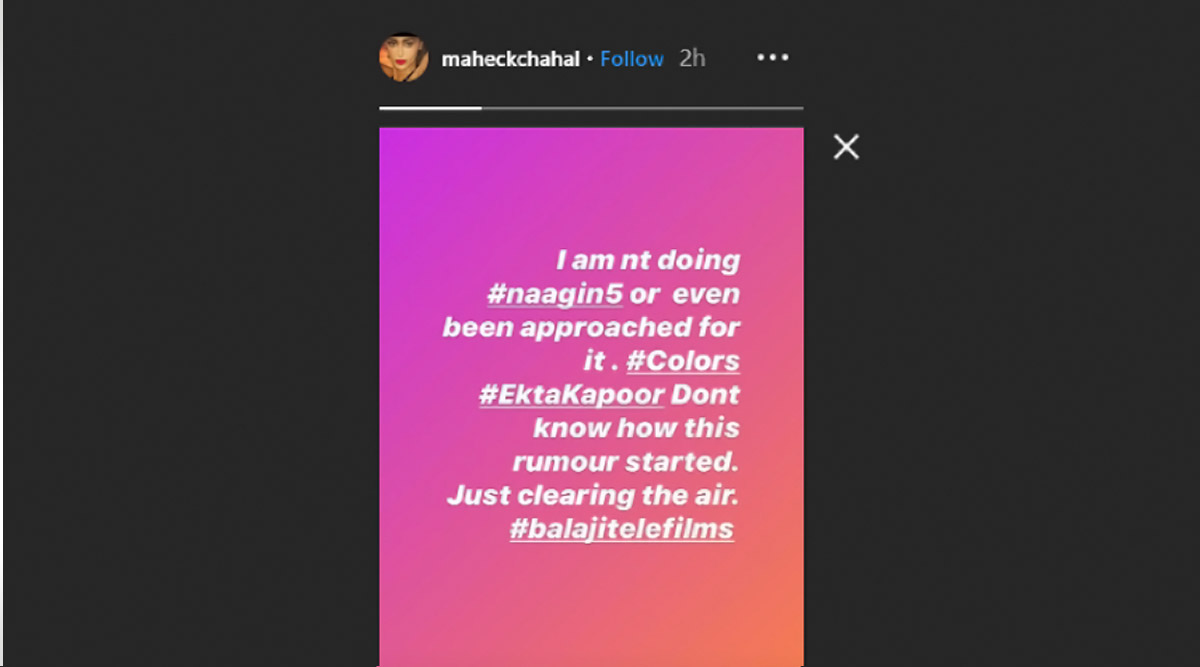 If this happens, Maheck will be collaborating with Balaji for the second time. Mahek had played the chudail in Ekta's Mona Singh-Vivek Dahiya starrer Kavach: Kaali Shaktiyon Se. It can be recalled that Maheck had received a good response for her character, but she had to exit the show due to some health concerns. However, the portal has maintained that their sources have revealed Maheck is a strong contender.

(The above story first appeared on LatestLY on May 31, 2020 11:47 PM IST. For more news and updates on politics, world, sports, entertainment and lifestyle, log on to our website latestly.com).