Seems like 2021 is going to be filled with entertainment, entertainment and only entertainment. As Netflix just announced its slate of films, series and reality shows that'll release in the current year and boy there's something for everyone. Have a look! 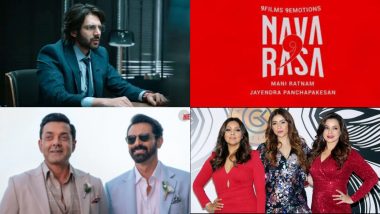 Seems like 2021 is going to be filled with entertainment, entertainment and only entertainment. As Netflix just announced its slate of films, series and reality shows that'll release in the current year and boy there's something for everyone. From dark, thriller romantic to something fashionable, the streaming platform has kept in mind the needs of all. There's Kartik Aaryan's Dhamaka, Dhanush-starrer Jagame Thandhiram, Navarasa to reality shows like Fabulous Lives of Bollywood Wives season two, we feel it is a superb line up for sure. Here, check out the full list below. Kapil Sharma Special, Aranyak, Fabulous Lives Of Bollywood Wives Season 2 - Netflix India's Web-Series Line-up Is Fiery (Watch Video).

Ajeeb Daastaans is an anthology of four strangely contrasting stories which delves into fractured relationships and unexplored spaces. The stories set in varied milieus, explore jealousy, entitlement, prejudices and toxicity which are often entangled within the heart of their relationships. Each story also takes you on a journey where one would struggle with the moral dilemma of what’s right and what’s wrong, as the lines between them get blurred.

Helmed by Shree Narayan Singh, set in Kannauj, this film is about a chirpy young girl called Bulbul who has one simple dream - she wants her groom, Rishi Kumar, to come in his baraat atop a horse. Soon enough Bulbul realizes that her innocent, harmless wish will meet resistance in their traditional village. But Bulbul is adamant to have her way and fight for what’s right.

Directed by Ram Madhvani and starring Kartik Aaryan, this film will see the actor as a frustrated ex-news anchor is given another chance to go live on prime-time television when a terrorist calls him with a bomb threat. Little does he know that this call will change his life and throw him into a fast-paced game of betrayal.

A woman whose heart longs to live like words captured in a novel, finds herself entangled in the murder of her own husband. Will she get lost in the chaos of her real-life-novel or find her innocence? The flick stars the terrific actress Taapsee Pannu in the lead.

Magic Meenu, a small-time magician in Neemuch, Madhya Pradesh has to win a local football tournament in order to marry the love of his life. There are just two things against him- the girl doesn’t love him back and his team hasn’t won a game in years! Friendships are tested and hearts are mended as love meets magic in this heartwarming sports comedy. This one stars Jitendra Kumar and  Arushi Sharma.

Helmed by Karthik Subbaraj, the film tells the story of Suruli, a nomadic gangster who has to choose between good and evil in a war for what one can truly call home. It stars Dhanush, James Cosmo, Aishwarya Lekshmi  playing key roles.

Starring Abhimanyu Dassani and Sanya Malhotra, this flick will see the story of a young couple Meenakshi and Sundareshwar, who enter into an arranged marriage because their first names together make Madurai's famous temple 'Meenakshi - Sundareshwar'. The newlywed couple who barely know each other, struggle with the trials, tribulations, and insecurities of a long-distance relationship.

The poignant film follows the story of a recently bereaved, middle-aged truck driver, Ghalib, who is coping with a personal tragedy and the consequences thereafter, while facing the existential threat of losing his job to a young recruit. The events in the story come together as Ghalib's truck touches the 500,000 kilometers mark - a record at his company.

This one is going to be an anthology having nine films in total. In a nutshell, it's 9 films, 9 emotions, 9 notable directors and one noble cause.

The film follows the story of recently widowed Sandhya struggling to mourn the death of her husband, as she sets out on the path of self-discovery, attempting to find her identity and purpose in life- all this while living amidst the quirky members of her joint family. Sanya Malhotra plays the lead here.

When architect Vikram Saxena proposes sharing a Penthouse with his five married friends, it seems like the perfect solution for their indulgences, until one morning, a body of an unknown woman is found in the Penthouse. Friendships tested, loyalties questioned and marriages crumble as the shocking truth unravels in this relentless whodunit. The movie stars Bobby Deol, Arjun Rampal, Sharman Joshi, Mouni Roy, Cyrus Broacha, Tisca Chopra and Abrar Zahoor.  Haseen Dilruba, Dhamaka, Jagame Thandhiram - Netflix's 2021 Line-Up Is Here (Watch Video).

A family entertainer that promises to strike a chord with its stellar cast and their emotions, Sardar Ka Grandson will premiere this summer on Netflix. Starring the iconic Neena Gupta and heartthrob Arjun Kapoor, along with Rakul Preet Singh, Aditi Rao Hydari, John Abraham, Soni Razdan, Kanwaljit Singh, Kumud Mishra and Divya Seth, the film showcases the journey of a US-return grandson who will go to any length to fulfil his grandmother’s last wish.

Sharad Nerulkar has devoted his life to becoming an Indian classical music vocalist, diligently following the traditions and discipline of the old masters, his guru, and his father. But as the years go by, Sharad starts to wonder whether it’s really possible to achieve the excellence he’s striving for. A journey of devotion, passion, and searching for the absolute in contemporary Mumbai.

After a foreign teenage tourist disappears in the misty Himalayan town, a harried, local cop Kasturi must join hands with her city-bred replacement Angad, on a big-ticket case that digs up skeletons and revives a forgotten Himalayan myth of a bloodthirsty, serial killing entity in the forest. It stars Raveena Tandon, Parambrata Chatterjee, Ashutosh Rana, Zakir Hussain.

Five women across generations wrestle with desire, ethics, personal crises and vulnerabilities to own their ambition in contemporary urban India. As glass ceilings are shattered, and hearts are broken, difficult choices have to be made. And as each woman strives to find her own truth, they find in each other an unexpected understanding and the sliver of a bond.

Arya Iyer is a man who suffers from chronic objectivity, extreme clarity and the debilitating capacity to see in any situation what others are trained to ignore. It gets him in trouble with people wherever he goes. Naturally, his marriage is over, but he has persuaded his estranged wife to continue living with him in a large villa in Gurgaon to create the myth of family for their tween daughter, who is terrified of their divorce.

Delhi Crime is a first-of-its-kind gripping true-crime series that delves into investigations undertaken by the Delhi Police. After solving the case that shook the nation, Vartika Chaturvedi and her team are up for a new challenge. Will Vartika and her team help the public fight their fear?

Love on the run. On a guitar strum. At a protest. With a house guest. Cupid strikes in unexpected ways. Feels like Ishq is an anthology of seven warm and breezy stories about the kindling of young love.

This is a suspenseful family drama about a global superstar, wife, and mom who suddenly vanishes without a trace. As police and loved ones search for answers to her disappearance, her perfectly crafted facade is stripped away, revealing hidden truths and painful lies in the life of an iconic actress. This one stars Madhuri Dixit.

Sunny and Gudiya have one final chance to avenge their past. As bigger players enter Jamtara, politics tries to control phishing, but phishing ends up controlling politics.

It's season 4 of Little Things and six years of Dhruv and Kavya's togetherness. If seasons one to three were a trilogy that dived deep into the facets of young love, season four explores a new maturing love and the growing pains and adventures that come with it.

Glamour ke peeche kya hai? It’s a tough world, but Masaba and Neena Gupta are tougher. The mess is over, and this time the plan is world domination. Masaba goes in front of the camera, and Neena ji decides to go behind them. All the while dealing with new loves, old loves, and some impossible loves. Both women take their careers, image, friendships and lovers, in their own hands and turn everything around.

Dimple, the genius coder, has lost her app. Rishi, the hopeless romantic, has lost all faith in love. Fate brings this “Mismatched” couple face to face again, as Rishi is forced to step back into the mess he left behind. With their futures at stake, Dimple and Rishi must navigate the rough terrains of frayed friendships, new love interests, broken promises, academic stress and shocking rivalries.

A revolutionary film maker, an auteur, and the creator of the Feluda series, Satyajit Ray is also remembered for writing some of the best short stories India has ever seen. Vastly varying in genre and style, these stories are full of thrills, twists and turns, and a strong emotional core keeping you completely hooked till the end. For the first time ever we present four such passionately curated stories under Ray.

Think of the most dreaded villain! What if he has a daughter who truly, deeply, madly falls in love with you? What if you don't love her back? What if you are in love with someone else? How will you say no and get out of the situation? After all, quite like her father, she's not likely to take 'no' for an answer. A romantic simpleton finds himself in the middle of this crossfire in Yeh Kaali Kaali Ankhein, a dark comical pulpy desi thriller about three things that matter the most in the country- paisa, taqat aur pyaar!

The Fabulous Lives of Bollywood Wives was one of the binge blockbusters of 2020. Love them or hate them - nobody could be indifferent to our queens of sass, spice, and all things nice. Ok, maybe not always so nice! But you know what is twice as nice as #TheFabulousLives Season 1? SEASON 2. Yes, it is the twist everyone saw coming. The Bollywood Wives will be back - with an all-access card to a world that everyone obsesses over. Sass, snark, sisterhood - seatbelts are off, the claws are out and the masks (metaphorical only) are coming off-- it's no holds barred. And wait, could they have some cool new company too? This one will see Neelam Kothari Soni, Maheep Kapoor, Seema Khan, Bhavana Pandey.

Here's a taste of the reality shows, documentaries, and stand-up comedy specials we are serving you in 2021.#AbMenuMeinSabNew pic.twitter.com/i38dIQISKv

Eight popular social media influencers whose "influence" is put to test in the real world without their super power - their blue tick verified, and highly followed accounts! In a battle for survival and influence - who will be the most 'liked' on and off the phone screens?

Beautiful clothes, lavish parties, incredible locations. This series presents behind-the-scenes views of six Indian weddings, showcasing the work that goes into the spectacle and highlighting the personal struggles and triumphs of those taking the plunge.

That's it, guys! These are some of the major releases on Netflix. So, which one from the above are you excited to binge watch? Tell us in the comment section below. Stay tuned!

(The above story first appeared on LatestLY on Mar 03, 2021 04:25 PM IST. For more news and updates on politics, world, sports, entertainment and lifestyle, log on to our website latestly.com).