Never Have I Ever season 2 is streaming on Netflix. This teen comedy series continues to be problematic and predictable despite the first few episodes making you laugh out loud. 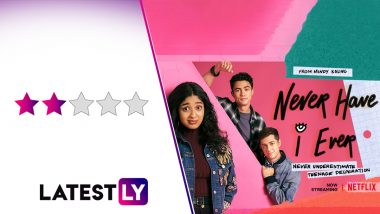 Never Have I Ever 2 movie ratings (Photo credit: Twitter)

Never Have I Ever 2 Review: These teen movies and series always make me feel gravely cheated for I would loved to have a High School so cool. Never Have I Ever 2 continues to pander to that notion, just like its first season and honestly, it doesn't bother me anymore. That's hardly the problem here. What does bother me is even for such mush-filled inane teen drama, there's got to be some runtime limitations. Never Have I Ever Season 2 Trailer: Maitreyi Ramakrishnan’s Netflix Series Puts Devi Again in. Romantic Dilemma, Facing a New Rival! (Watch Video)

Devi (Maitreyi Ramakrishnan) is still self-absorbed and annoyingly self-centered. Last season ended on a cliffhanger if I can call it that, with Devi kissing her arch-rival turned potential boyfriend Ben (Jaren Lewison) while Paxton (Darren Barnet) waited for her outside her house to make it official. Devi gets greedy and decides to date both. She is helped and cheered on by her best friends Eleanor (Ramona Young) and Fabiola (Lee Rodriguez). Obviously, that's not going to end well and it doesn't, with the boys finding out about it quite soon. From there on, Devi is either seen apologising to them, boys getting back at her, her friends trying to stop her from making wrong decisions all the time. To make matter worse, she even gets an Indian rival.

The first season had successfully jammed the stereotypes around India and its cultures. People lapped it up. This season, the same has been kept restricted to  the jibes of Nalini Vishwakumar, played by Poorna Jagannathan, at her daughter Devi. Can't say if I am relieved but it is a change for good.

The initial three episodes are quite funny. Of course, it's painfully predictable but the gags are hysterical. In fact, the Ben vs Paxton pros and cons list that the girls chalk out is extremely fun despite being obnoxiously shallow. You feel guilty of aligning with it.

Or the time when Fabiola shows Devi a slideshow on why she will never get caught in her two-timing adventure is just genius! It so felt like a Mindy thing to do. The reveals and big reveals, the twists and turns are quite interesting too and keeps one hooked. There are quite a few, to be honest, and all are neatly addressed.

And then everything goes downhill. This Ben or Paxton plot continues for the entire season and at times gets boring. What peeved me more was that there's a Paxton POV episode voiced by Gigi Hadid, which talks about how good-looking people don't have to be just that. It's such a mature plot to have in a teen drama and yet in another episode, he is made to do just that, unapologetically. So what's the point here?

The Anorexia episode is treated so lightly that it's 'hilare', pun intended. A disclaimer at the end of the episodes to reach out for help during such cases is not a good enough reason to incorporate it in the story. So much attention has been paid to Devi's woes that the season just breezes past all other sub-plots, not giving space to any of them to actually mean much. Also, the season could have easily ended with episode seven and the end would have served as an amazing cliffhanger for the next season. But the makers decided to drag three episodes further to a cliched open ending. Never Have I Ever: Chrissy Teigen Exits Netflix’s Comedy Series After Online Bullying Controversy

Check out the trailer of Never Have I Ever season 2

Performances are obviously fantastic. Maitreyi Ramakrishnan plays Devi like she was born to do this role. She switches from one emotion or character makeup to another so smoothly you wouldn't want anyone else to play that role. Ramona Young and Lee Rodriguez as Devi's BFFs continue to be the most charming duo in the series with their distinctive ways.

- continues to be problematic

Never Have I Ever season 2 could have undone every unpleasant story turns committed in the first season but the makers decided if it worked then, the formula will work now as well. I have a feeling they are right, but I am no fan off it! Never Have I Ever 2 is streaming on Netflix.

(The above story first appeared on LatestLY on Jul 15, 2021 07:31 PM IST. For more news and updates on politics, world, sports, entertainment and lifestyle, log on to our website latestly.com).