After Gold and Kabir Singh, Nikita Dutta will next be seen in The Big Bull and the Malayalam remake of Ezra. The actress is a noted name in the television circuits with shows like Ek Duje Ke Vaaste and Haasil to her credit. 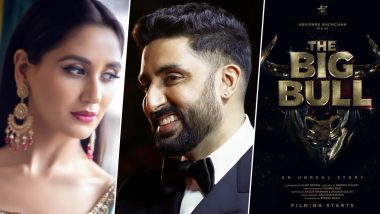 Actress Nikita Dutta has been on a roll since her last big-screen outing Kabir Singh smashed major box-office records. Nikita was seen as the parallel lead in the movie opposite Shahid Kapoor and her performance was not only noticed but also appreciated. But Kabir Singh was not Nikita Dutta's first movie. She made her debut in a cameo role opposite Sunny Kaushal in Reema Kagti's Akshay Kumar-Mouni Roy starrer Gold. EXCLUSIVE: Nikita Dutta Opens Up On Her Stint in Kabir Singh, The Film’s ‘Toxic Masculinity’ and Much More…

And now, Nikita has landed yet another big-budget starrer- Abhishek Bachchan starrer The Big Bull, where she will be seen opposite Junior Bachchan. The movie is based on the Harshad Mehta Securities Scam of 1992, reports Bombay Times. The reports also mentioned that Nikita has already started shooting for the movie in the capital. Abhishek Bachchan had also shared a picture of the mahurat shot of the film a few days back.

A source in the daily was quoted as saying, "The makers had liked Nikita and Abhishek’s pairing in the first go. She plays an important role in the story." Along with Abhishek and Nikita, the film also starts Tumbbad actor Sohum Shah, Sourabh Shukla and Lekha Prajapati and will be produced by Ajay Devgn's banner. It was earlier reported that Illeana D'Cruz will be seen as the leading lady, but looks like Nikita has bagged this project.

(The above story first appeared on LatestLY on Nov 14, 2019 09:20 AM IST. For more news and updates on politics, world, sports, entertainment and lifestyle, log on to our website latestly.com).